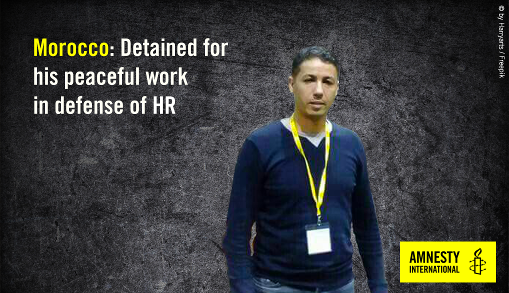 On 5 April, Moroccan authorities arrested Zine El Abidine Erradi upon his arrival from France at Agadir airport in Morocco. He is a human rights defender with refugee status in France.

After his arrest, he was transferred to Sidi Ifni police station. On 6 April, the Public Prosecutor of the Court of Appeal in Agadir confirmed his arrest on the basis of a warrant issued in absentia in December 2014 by the same court. He is now held in Ait Melloul Local Prison, near Agadir, 160 kilometers far away from the southwestern city of Sidi Ifni, where his family lives. According to his family, he is sleeping on a slab in a cell with 17 other detainees. Zine El Abidine Erradi has been on hunger strike from 9 to 19 April to protest against his arbitrary detention. During the hunger strike he has been hospitalized twice.

Zine El Abidine Erradi was convicted in 2011 to 1 year prison term, and fined 5.000 dirhams (around US$522) for his participation in the public protest of the 20 February movement in Sidi Ifni on trumped-up charges including violence and insults to public officers and destroying public properties. But he has not served the sentence and the authorities did not issue an arrest warrant until 2014. Zine El Abidine Erradi fled from Morocco in 2015 to claim asylum in Europe, fearing prosecution because of his human rights work. In July 2017, he obtained his refugee status and 10 years residence in France. On 5 April, he was travelling to Morocco as an exceptional measure to visit his family after his father’s death, after the French authorities provided him on 27 March with a travel document allowing him to go to Morocco without losing his refugee status in France.

Zine El Abidine Erradi is a former political prisoner in Morocco. He is a founding member of the association Ifni Memory and Rights in Sidi Ifni and member of Moroccan Association for Human Rights in Paris. Before leaving Morocco, he was arrested twice and prosecuted three times for his work in defense of human rights.

On 5 April 2019, human rights defender Zine El Abidine Erradi was released after serving a one-year sentence in Agadir local prison, following an unfair trial. Zine El Abidine holds a refugee status in France and had been arrested upon his arrival in Morocco to visit his father. As of 15 May, he could eventually come back in safety in France after receiving his travel documents.

NO FURTHER ACTION IS REQUESTED. MANY THANKS TO ALL WHO SENT APPEALS.

On 5 April 2019, human rights defender Zine El Abidine Erradi was released after serving a one-year sentence, solely in relation to his peaceful activism. After the Moroccan and French authorities granted him the needed travel documents on 15 May 2019, he could eventually travel back to France, where he holds a refugee status.

In April 2018, Moroccan authorities arrested Zine El Abidine Erradi upon his arrival from France, at Agadir airport in Morocco. His arrest followed a warrant issued in absentia in December 2014 by a court in Agadir, based on trumped-up charges, including "violence and insults to public officers" and "destroying public properties". Zine El Abidine was travelling to Morocco for exceptional circumstances, with a travel document provided by the French authorities.

Before leaving Morocco to seek asylum in France, he had been arrested twice and prosecuted three times for his work in defence of human rights in Sidi Ifni, his hometown, in southern Morocco.

Amnesty International has been calling for Zine El Abidine Erradi’s immediate and unconditional release, as he was held solely for his peaceful work in defence of human rights, and for his safe return to France. Amnesty’s mobilisation, particularly in Morocco and France, has been essential to increase the visibility on his case, and to pressure the authorities to grant him a safe return to France.

THIS IS THE SECOND AND FINAL OUTPUT FOR UA 76/18