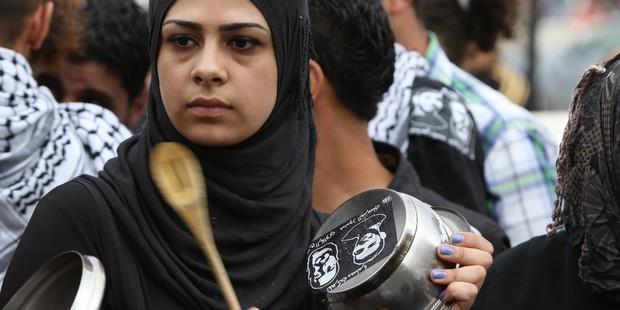 A Palestinian woman protests against the Israeli practice of detention without trial or charge. © ABBAS MOMANI/AFP/GettyImages

Israel must release all Palestinians held under long-standing administrative detention laws or charge and try them promptly and fairly, Amnesty International said in a new report.

'Starved of justice: Palestinians detained without trial by Israel’ documents human rights violations associated with administrative detention - a relic of British control of the area that permits detention without charge or trial on indefinitely renewable military orders.

The report also calls on Israel to stop using these measures to suppress the legitimate and peaceful activities of activists in the Occupied Palestinian Territories.

It urges the immediate and unconditional release prisoners of conscience held just for peacefully exercising their rights to freedom of expression and assembly.

Administrative detainees - like many other Palestinian prisoners - have been subjected to violations such as the use of torture and other ill-treatment during interrogation, as well as cruel and degrading treatment during their detention, sometimes as punishment for hunger strikes or other protests.

In addition, administrative detainees and their families must live with the uncertainty of not knowing how long they will be deprived of their liberty and the injustice of not knowing exactly why they are being detained.

Like other Palestinian prisoners, they have also faced bans on family visits, forcible transfer or deportation and solitary confinement.

Israel has a duty to uphold due process and fair trial rights, and to take effective action to end torture and other ill-treatment of detainees.

Israel must also allow family visits for all Palestinian prisoners and detainees, and end forcible transfer and deportation. And Israel is obligated to investigate violations, bring perpetrators to justice, and provide reparations to victims.

As of the end of April there were at least 308 Palestinian administrative detainees, among them 24 members of the Palestinian Legislative Council (PLC), including its Speaker, Aziz Dweik. Human rights defenders such as Walid Hanatsheh and at least four journalists, in addition to university students and academic staff, were also among those behind bars.

Their non-violent protest was followed by a mass hunger strike which began on 17 April 2012 and included an estimated 2,000 other Palestinians in Israeli prisons, many of whom are either serving prison sentences or awaiting trial.

Following a deal brokered by Egypt, the mass hunger strike was suspended on 14 May 2012. However, Palestinian footballer Mahmoud al-Sarsak from Gaza is now more than 70 days into his hunger strike which he began in March.

His protest is against his continuing detention without charge or trial for almost three years. His life is currently in grave danger as he remains held at the IPS medical centre which cannot offer the specialized medical treatment required by patients in such critical condition.

Under the 14 May deal, Israel agreed to end solitary confinement for 19 prisoners - held in isolation for up to 10 years - and lift a ban on family visits for prisoners from the Gaza Strip, among other things.

“Despite many media reports suggesting that the Israeli authorities had agreed as part of the deal to release administrative detainees at the end of their current orders ‘unless significant new information was received’, our information is that it is business as usual when it comes to detention without charge or trial,” said Ann Harrison.

“We believe that Israel has renewed at least 30 administrative detention orders and issued at least three new ones since this deal was struck, and family visits for Gazan prisoners have still not started.

“The authorities in Israel have a duty to protect everyone in Israel and the Occupied Palestinian Territories from threats to their lives and physical integrity. But they must do so in a manner that respects human rights,” said Ann Harrison.

“Israel has used its system of administrative detention - intended as an exceptional measure against people posing an extreme and imminent danger to security - to trample on the human rights of detainees for decades. It is a relic that should be put out to pasture.”