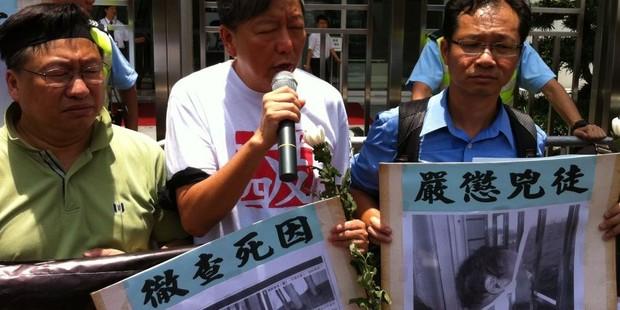 Activists have called for an investigation into Li Wangyang's death

The Chinese authorities must initiate a full, independent investigation into the death in hospital of a former prisoner of conscience, Amnesty International said today amid outrage at the case among China's activist community.

Li Wangyang, who was released from prison last year, was found dead in his ward at the hospital in Shaoyang city, Hunan province on Wednesday. He has suffered from multiple health problems since his release.

In the past 24 hours, thousands have signed an online petition by a group of activists who dispute the authorities' explanation that Li committed suicide by hanging himself. Li's family and friends have also cast doubt on the reported cause of death.

"The Chinese authorities must thoroughly investigate the circumstances surrounding Li Wangyang's death and take seriously the claims made by his family and friends that this was not suicide," said Donna Guest, Asia Pacific Deputy Director at Amnesty International.

"Li Wangyang was a tireless human rights campaigner who suffered at the hands of the government. His family and friends deserve to know the true cause of his death."

Li's body was found with a cotton noose tied around his neck. According to his relatives, his feet were still touching the ground when they saw him.

Police reportedly prevented relatives and friends from taking detailed photos of the body at the hospital. They took the body away and  have been guarding it since then.

It is unclear whether the authorities will allow a full post-mortem investigation.

Li was a prominent figure in the labour rights movement who had been persecuted by the Chinese authorities for the past two decades.

In 1989 he was involved in setting up the Shaoyang Workers' Autonomous Federation. The same year, he was sentenced to 13 years' imprisonment for his involvement in the 1989 pro-democracy movement.

He was reportedly  severely beaten by prison guards and held in solitary confinement.

He was moved to a hospital in June 1996 to receive treatment but eight months later he was taken back to prison.

Li was released early in June 2000 because of his poor health. He began petitioning the authorities for compensation to cover the cost of medical treatment but in May 2001 he was re-arrested after he went on hunger strike.

He was given a 10-year sentence for "inciting subversion" and was finally freed in May 2011.

On 2 June 2012, the eve of the 23rd anniversary of the military crackdown on the 1989 pro-democracy movement, Li gave an interview to overseas media where he spoke about the torture which had left him both blind and almost deaf. He also said that he would continue to fight for a democratic China.