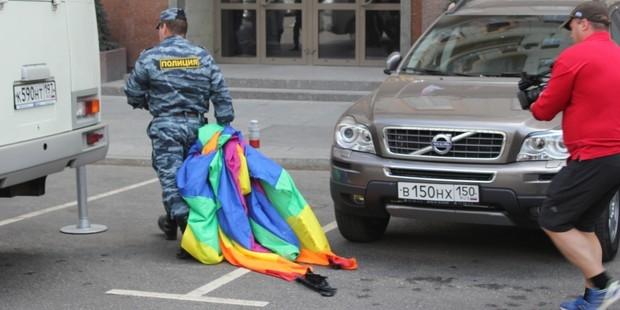 Moscow’s authorities must uphold the rights to freedom of assembly and expression for the city’s lesbian, gay, bisexual and transgender (LGBT) activists, Amnesty International said after dozens were detained at a Pride event in the Russian capital.

On Sunday, a small group of LGBT activists gathered outside the Moscow City Duma and the Moscow mayor’s office, where they attempted to unfold rainbow flags and raise small pieces of paper calling for an end to homophobia.

LGBT activists were immediately detained and later charged for allegedly violating the law on public meetings.

Meanwhile, another group of people was allowed to gather for at least an hour in front of the Mayor’s office to protest against the Pride and shout homophobic slogans ? police told the counter-demonstrators that their protest had been “unauthorized”, but only arrested those who attempted to attack LGBT activists.

“The Moscow authorities’ shameful approval of homophobia and discrimination against LGBT people is evident in the different treatment received by these two groups of protesters,” said John Dalhuisen, Amnesty International’s Europe and Central Asia Programme Director.

“Freedom of assembly must be protected for all, and Moscow’s police must halt their arbitrary detention of people merely based on their sexual orientation or gender identity.”

Among those detained was Pride organizer Nikolai Alekseyev, who was whisked off the street the moment he appeared near the mayor’s office with a rainbow flag in his hand.

Journalist Elena Kostiuchenko, who tried to unfold a rainbow flag, suffered a twisted arm when someone tried to tear the flag from her hands.

Activist Yuri Gavrikov, who spoke to journalists and tried to unfold a small rainbow flag was detained when he stood alone on a side street near the mayor’s office.

“We will continue - these are actions to defend our human rights and we notice that more and more people want to join us. These actions become a platform for us to start a dialogue and call for broader recognition of our rights,” Yuri Gavrikov told Amnesty International.

While police did detain counter-demonstrators who were trying to physically attack the LGBT rights activists, some were reportedly later released without charges.

In 2010, the European Court of Human Rights criticized Russia for failing to uphold the right to freedom of assembly and for discrimination on grounds of sexual orientation. The Court found Russia had violated the rights of Nikolai Alekseyev, the main organizer of Sunday’s action, by repeatedly blocking him from holding a Pride in Moscow over a five-year period.

Despite this, Moscow authorities continue to oppose Pride events in the city, in violation of Russian and international human rights law.

Russia’s second-largest city St. Petersburg and other cities and regions have introduced laws which ban “propaganda of homosexualism, sodomy and lesbianism among minors”.

On 25 May, the City Court of St. Petersburg turned down a complaint by an LGBT rights organization against the ban on “propaganda of homosexualism”. The court decided that this law is in line with Russian legislation and legal norms.

“St. Petersburg and other Russian cities must immediately repeal such laws, which are clearly discriminatory in nature and only serve to fuel homophobia,” said Dalhuisen.