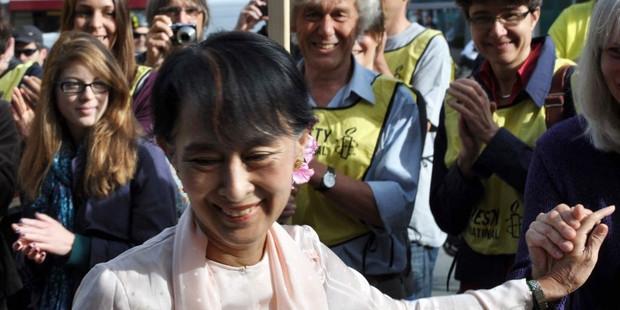 The Burmese opoosition leader and former prisoner of conscience is visiting Europe for the first time in more than two decades.

This historic trip - which includes stops in Norway to accept the Nobel Peace Prize and Ireland to accept Amnesty International’s Ambassador of Conscience Award - is her first visit to Europe in more than two decades.

The following timeline highlights the organization’s relationship with the Burmese activist over the past several decades:

1988
After more than 20 years of military rule, tens of thousands march to demand democracy. Soldiers fire on crowds, killing an estimated 3,000 people.

National League for Democracy (NLD) formed, with Aung San Suu Kyi general secretary. The NLD has a policy of non-violence and civil disobedience.

1989
Suu Kyi is placed under house arrest, without charge or trial. Amnesty International adopts Suu Kyi as a prisoner of conscience

1990
Despite detention of Suu Kyi, NLD wins election with 82 per cent of parliamentary seats. Myanmar authorities refuse to recognise results.

1998
Suu Kyi makes a personal pledge in support of the Universal Declaration of Human Rights as part of Amnesty’s Get up, Sign up! campaign.

To mark the 10th anniversary of the pro-democracy movement in Myanmar, Amnesty launches a campaign calling on the Burmese government to end torture and release all political prisoners.

2003
Amnesty International granted access to Myanmar for the first time under an official visa.

2007
A new wave of public dissent begins, culminating with the monk-led peaceful “Saffron Revolution”, violently repressed by the authorities.

Amnesty International calls a Global Day of Action for Myanmar, with rallies in cities around the world.

October Some political prisoners, including comedian Zarganar, are freed in a general amnesty.
December NLD re-registers as a political party.

Amnesty International points out that there are still hundreds of political prisoners in Myanmar, that abuses continue, particularly against Kachin civilians, and repressive laws remain in place.