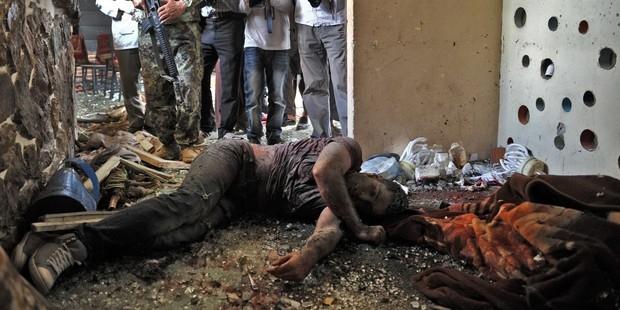 The deaths of 15 civilians in a Taleban attack on a hotel outside Kabul is a shocking reminder of why the Afghan government must work with the International Criminal Court to help bring to justice all those responsible for war crimes and crimes against humanity in Afghanistan, Amnesty International said.

On Thursday night, armed Taleban fighters stormed the Spozhmay Hotel in the Lake Qargha area near the capital, taking dozens of hotel guests and staff hostage.

In the ensuing siege that lasted almost 12 hours, a fierce gun battle broke out between Taleban fighters and NATO and Afghan troops, resulting in the deaths of at least 20 people - including 15 civilians.

It was the most serious single loss of civilian life in Afghanistan since the Taleban attacked Kabul’s Intercontinental Hotel a year ago, killing 22 people, again mostly civilians.
“The Taleban’s repeated brazen attacks targeting civilians show an utter disregard for human life and may amount to war crimes which should be investigated and prosecuted by the International Criminal Court, as should crimes which may have been committed by NATO and Afghan troops,” said Catherine Baber, Amnesty International’s Acting Asia and Pacific Programme Director.

Afghanistan is a state party to the Rome Statute of the International Criminal Court since 2003.

“The Afghan government and its international partners must not lose sight of human rights as they pursue reconciliation with the Taleban. Any potential peace deal must not include impunity for war crimes and other grave human rights abuses committed by all parties to the conflict,” she added.

According to UN data, the Taleban appear to be responsible for the vast majority of attacks on civilians in Afghanistan - out of 3,021 civilian deaths reported last year, 77 per cent were attributed to them and insurgent groups.

On 8 November 2011, Taleban leader Mullah Omar ordered fighters to protect civilians and avoid targeting civilian objects. The order seems to have been nothing more than a propaganda ploy, as in the past year, the armed group has increasingly used “soft” targets like hotels to maximize the civilian death toll.

Amnesty International has documented how they and other insurgent groups have increased their use of sophisticated suicide attacks in busy civilian areas - including hospitals, schools, hotels and mosques - and have regularly hidden behind civilians, knowingly putting them in danger.

The Taleban and other insurgents have also specifically targeted women, killing the headmaster of a girl’s school in May 2011, as well as female MPs and aid workers.

International humanitarian law - the laws of armed conflicts - stipulates that nobody should target civilians, regardless of their political allegiance.

“Under international humanitarian law, all parties to a conflict must protect civilians and civilian objects while carrying out their military operations,” said Catherine Baber.

“The Taleban are well aware of this and even refer to it when deemed to their advantage. But their current strategy seems to rely on systematically violating these laws by jeopardizing civilians and maximizing the human cost.”