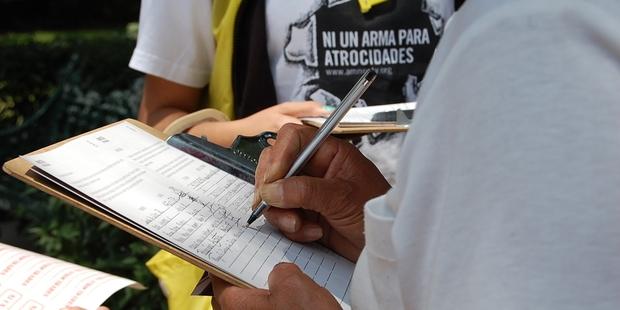 Later today, representatives from more than 190 governments meet in New York for the first day of a month-long negotiation at the United Nations to agree an Arms Trade Treaty, which will control the supply of weapons, ammunition and armaments.

An effective Arms Trade Treaty would be based on a “Golden Rule”: if there is a substantial risk that arms exported to another country are likely to be used for serious human rights abuses; violations of international humanitarian law; or to undermine sustainable development, those arms supplies must be stopped.
More than 30 high-profile Oxfam and Amnesty International supporters including Paul Conroy - the British war photographer injured in the mortar attack that killed Sunday Times reporter Marie Colvin and French photo journalist Remi Ochlik, in Homs, Syria, earlier this year ? have urged governments to deliver a strong and effective treaty that helps protect human rights by preventing the flow of arms to irresponsible users.
The letter has been sent to the UN Secretary-General, who will play a vital role in the negotiations, by keeping the talks on track to deliver a strong treaty that will really save lives.

“Every year an average of two bullets for every person on this planet is produced. With so few global rules governing the arms trade, no one really knows where all those bullets will end up ? or whose lives they will tear apart.

“Under the current system, there are less global controls on the sales of ammunition and guns than on bananas and bottled water. It’s a ridiculous situation.

“As supporters of Amnesty International and Oxfam, we urge governments to step forward and deliver a robust, effective treaty that protects human rights. A treaty that puts a stop to the needless deaths and injuries which occur every day as a result of armed violence and conflict. The decisions taken around this treaty really are a matter of life and death.”

The lack of clear binding principles governing decisions on international arms transfers combined with patchy diverse and poorly implemented national regulations are inadequate to deal with the increasingly globalised nature of the arms trade. As a result, irresponsible users are allowed to violate international humanitarian and human rights law.

Colombian rock band Los Aterciopelados said:
“In Colombia, for decades civilians have been victims of armed conflict. Displacement and violence are everyday occurrences. The ceaseless flow of arms fuels this terrible reality. But this isn't just the story of our country. It’s vital that leaders implement a strong Arms Trade Treaty. It is urgently needed that they control arms to protect human rights.”

“This impressive range of public figures from many walks of life urging governments to sign-up to a robust treaty this month underlines the importance of the treaty negotiations.

“This is a critical moment.  The world has never before agreed to have a set of international rules on the arms trade. This is a chance of a lifetime, a chance of a generation, to make a difference by stopping the trade flows of arms going into the wrong hands.”