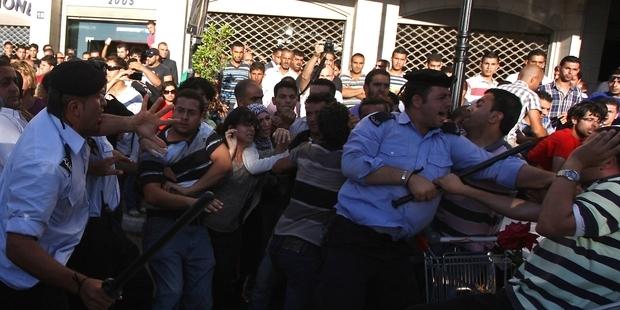 An investigation into the excessive use of force by Palestinian police against peaceful protesters in Ramallah must be independent and transparent, and those responsible must be brought to justice, Amnesty International said in a letter today to Palestinian Authority President Mahmoud Abbas.

The President’s office appointed a committee on Monday to investigate the events of 30 June and 1 July, when security forces attacked dozens of protesters in the West Bank city.

Amnesty International delegates witnessed the 1 July demonstration and saw peaceful protesters being beaten and attacked by security forces - including plainclothes police officers - some of whom were armed. They also collected testimonies from protesters who had been hospitalized for treatment after being injured by police at the demonstrations on 30 June and 1 July.

“The police violence our delegates witnessed in Ramallah is shocking and completely unacceptable. The committee formed to investigate the incidents must be given the resources and authority to conduct a credible, independent, prompt and effective investigation,” said Ann Harrison, Deputy Middle East and North Africa Programme Director at Amnesty International.

“The results must be made public in a timely fashion and all those found responsible must be brought to justice in proceedings that conform to international fair trial standards. The right of victims to receive reparation, including but not limited to compensation, must also be ensured.”

The peaceful demonstrations were called by Palestinian activists and civil society groups opposed to a meeting between Palestinian Authority President Mahmoud Abbas and Israeli Deputy Prime Minister Shaul Mofaz, which had been scheduled for 1 July.

After 5 pm on Saturday 30 June, some 200 people gathered in Ramallah’s al-Manara Square and began to march peacefully down Irsal Street towards the presidential compound.

Dozens of uniformed and plainclothes Palestinian police officers were present and used force to prevent the demonstrators from advancing.

Five demonstrators were detained for several hours at Ramallah’s main police station, where they claim police ill-treated them.

Journalists covering the protest were also beaten and prevented from filming or taking photographs.

Mohammad Jaradat, a 33-year-old independent journalist, was hospitalized after being injured while covering the 30 June protest.

Speaking to Amnesty International delegates at the Ramallah hospital on 30 June, Mohammad Jaradat described how plainclothes police officers attacked him - including by beating and kicking him and throwing him to the floor - both on the street during the protest and after dragging him to the police station.

He said that at the station, he was held down and beaten with a baton all over his body by a policeman in civilian clothing. Amnesty International believes that the treatment he received while in police custody amounted to torture.

Jaradat was only released and taken to the main Ramallah hospital after a police officer recognized him. He admitted himself to the hospital, where he remained for two days to receive treatment for serious injuries from the beatings.

Ten demonstrators were treated at the hospital for their injuries by the police and security forces on 30 June and by the evening of 1 July, 18 protesters had filed complaints with the Independent Commission for Human Rights.

A similar scene played out on Sunday, 1 July, when a second march was organized to protest against the police violence the night before. Amnesty International delegates witnessed the demonstration.

Several of those injured during Sunday’s demonstration told Amnesty International later how they had been beaten, kicked, pushed, insulted and otherwise ill-treated by the security forces.

Dalia, a 22-year-old woman was admitted to hospital after sustaining injuries to the head, arms and legs as a result of being beaten, scratched and kicked by police officers at Sunday’s demonstration.

Amnesty International and local human rights organizations who witnessed the demonstrations did not see any evidence of protesters using or advocating violence.

“The testimonies we’ve heard raise serious concerns about the Palestinian Authority’s respect for the rights to peaceful assembly and freedom of expression, which are guaranteed under the Palestinian Basic Law as well as international human rights treaties,” said Ann Harrison.

“To overcome the climate of impunity that has marred previous investigations into police misconduct and kept their results out of the public eye, the committee’s investigation into the recent incidents in Ramallah must be transparent and made public promptly.

“It is essential that those responsible for these serious human rights abuses against peaceful demonstrators are brought to trial according to international fair trial standards. Announcing an investigation is only the first step towards achieving justice and reparations for those injured by the security forces, and we will be monitoring every step of the process.”