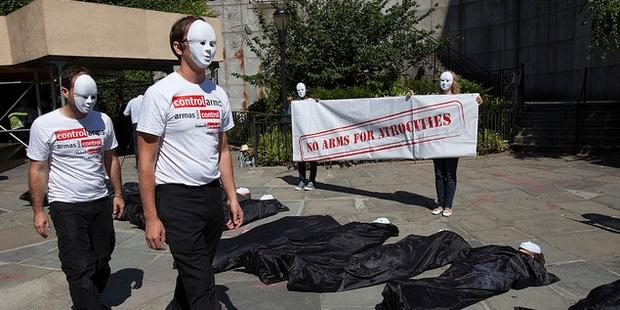 Activists in bodybags outside the UN building in New York have called for a strong arms trade treaty.© Control Arms Coalition/Andrew Kelly

He was speaking at UN headquarters in New York after receiving  a petition from the Control Arms coalition with over 600,000 signatures. The petition calls for an effective treaty to end the irresponsible and poorly regulated arms trade.

“I am convinced that your strong voices will inspire and motivate the delegates as they work to adopt a robust and meaningful treaty by the end of this month.”

Hundreds of thousands of supporters from Amnesty International and other organizations from across the world had signed the petition, as part of the campaign to achieve an Arms Trade Treaty that protects human rights.

At the presentation Salil Shetty, Amnesty International’s Secretary General, urged Ban Ki-moon to do everything in his power to ensure an effective Arms Trade Treaty is achieved.

“We must finally put an end to the body bag approach, where arms embargoes are imposed only after the killing has already gone on far too long,” said Salil Shetty.

“People all over the world know that we must have a treaty which addresses the cause of the problem, not just the result.”

Millions of people are killed, injured, raped, repressed and forced to flee their homes every year as a result of the irresponsible and poorly regulated arms trade.

There are currently no comprehensive legally binding international rules governing the global trade in conventional arms, and gaps and loopholes are common in both national and regional controls.

Amnesty International wants to see a treaty that makes clear arms must not be transferred where there is substantial risk that they will be used to commit or facilitate serious human rights abuses.

At the ceremony Ban Ki-moon was also presented with declarations from senior religious leaders, medical professionals and prominent parliamentarians calling for a strong treaty.

People from all over the world will be increasing the pressure on their leaders to deliver a strong ATT over the coming weeks, with the negotiations expected to conclude at the end of July.