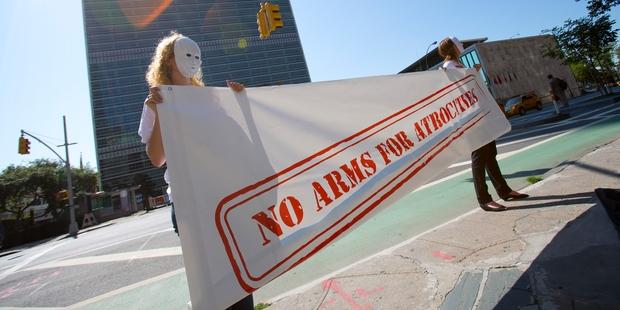 Governments gathered at the UN are in the last week of negotiations for a historic Arms Trade Treaty.(C)Control Arms Coalition/Andrew Kelly

The US administration is the pivotal player in closing major loopholes and setting strong rules for international transfers of arms in the final days of negotiations to agree an Arms Trade Treaty [ATT], Amnesty International said today.

After three weeks of talks to hammer out a deal at the UN in New York, a draft treaty text was published on Tuesday. Governments will now enter into three days of intense negotiations as they look to reach an agreement by Friday.

Major loopholes in the draft text include ammunition not being subject to tight decision-making controls, an array of weapons, munitions and related equipment not being covered, as well as the treaty only applying to the international trade of conventional arms instead of all international transfers including gifts and aid.

Small arms and light weapons and rules to stop arms transfers from being used for crimes against humanity, war crimes and serious violations of human rights are in the current proposal.

"There is still time to strengthen the human rights protections and close major loopholes in the draft treaty, including the obvious need to cover ammunition and all types of international transfer, not just trade,” said Brian Wood, Head of Arms Control and Human Rights at Amnesty International.
“The devil is in the detail and if the existing loopholes are left open and the rules not strengthened, these could easily be exploited to allow arms to be supplied to those that intend to use them to commit serious human rights violations, as the world is seeing in Syria.”

Whether the types of weapons, munitions and equipment the treaty covers is made more comprehensive and the rules to protect human rights are strengthened depends to a great extent on the decisions of the US administration in the coming days- the US is the world largest arms exporter.

“President Obama is the crucial decision maker. We call on him to make this happen before Friday. The White House holds the key as to whether this historic opportunity to protect human rights is taken,” said Wood.

“We urge the significant majority of governments that want to see a strong ATT to stand firm and make clear to the US that these gaping holes are not acceptable.”

The weakest section in the current proposal is the absence of types of weapons, munitions and equipment used for war crimes and serious human rights violations that should be covered by the treaty.

If this does not change in any final agreement, a large array of deadly and dangerous items would be excluded including small calibre artillery, drones, types of military aircraft and helicopters, some armoured and riot control vehicles and tear gas.

The types of international arms transfers that would not be covered as it stands include State-to-State transfers and gifts from one government to another. This would exclude a significant proportion of global arms supplies from being subject to the treaty.

Other essential elements that need to be included in the coming days to have a robust deal include measures that would criminalize any breaches of the treaty, stricter control of arms brokering and record keeping for at least 20 years.

There are some relatively strong set of provisions outlined in the draft text. These include rules to require governments to make a rigorous risk assessment before deciding whether an arms transfer can take place. If there is a substantial risk of the arms being used to commit serious human rights violations, even after mitigation measures have been taken, then the transfer “shall not take place”.

It is expected that sceptical governments like Syria, Iran, North Korea and Cuba, or even Russia and China, might try to attack these draft rules if the majority of States in the negotiations don’t stand firm and all insist the US stands up for strong human rights protections.

The negotiations are expected to carry on late into the night over the coming days as governments look to reach a deal.