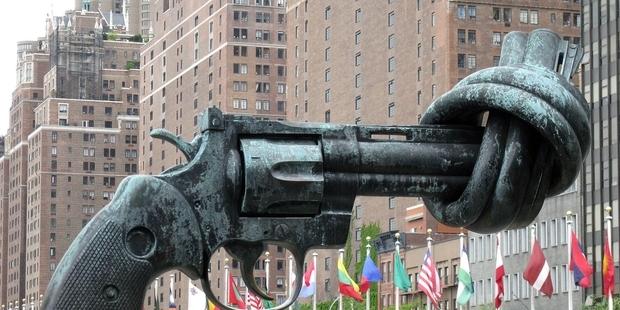 After a month of talks at the UN, world powers failed to agree on the text for a historic Arms Trade Treaty

As reports of civilians being targeted in Syria continue to make headlines, China, Russia and the US acted to delay what could have been a landmark agreement to end the irresponsible trade in arms, Amnesty International said on Friday.

“With one person dying every minute because of armed violence, there is an imperative for powerful states to lead.  President Obama has asked for more time to reach an agreement.  How much more time does he want?” said Salil Shetty, Secretary General of Amnesty International.

However, campaigners remain optimistic that an effective Arms Trade Treaty [ATT] is within reach as a significant majority of governments have indicated they will continue to work for a strong treaty that protects human rights.

The four week long negotiations at the UN in New York ended with more than 90 countries joining a statement reiterating their commitment to see the process succeed as soon as possible.

The call by the US, joined by Russia and China, to delay comes on a frantic final day of the negotiations.

Amnesty International has worked to make this treaty a reality for nearly twenty years ? acutely aware of the need end the irresponsible and poorly regulated arms trade. Millions of civilians are killed, injured, raped and forced to flee their homes as a direct result of the states transferring arms to government who use them against civilians.

Another consequence of the lack of proper regulation is the diversion of arms into the hands of war lords who continue to harm civilians in countries as diverse as Afghanistan, Somalia, DRC, Colombia.

“These negotiations were an acid test for world leaders. A powerful few failed to live up to their billing and instead opted for political self-interest.  This minority may have held back the tide of world opinion today but they cannot for much longer. The majority of governments that want a robust ATT must keep up the pressure so an agreement can be achieved later this year,” said Shetty.

The lack of leadership by China, Russia and the US was not the sole obstacle to finalizing a text. Obstructive behaviour by the Algeria, Egypt, Iran, North Korea, and Syria was indefensible but predictable.

The draft Treaty text is now likely to be sent back to the UN General Assembly in October.

International human rights and humanitarian law remain central to the draft text, demonstrating the consistent commitment by a large number of governments to ensure that this remains in any final agreement.

Amnesty International believes that the draft Treaty text is a solid basis on which to move forward but significant concerns remain on certain aspects.

If an agreement is reached later this year, it would be the first time in history governments would be required under a treaty to make decisions on arms transfers aimed at protecting civilians.