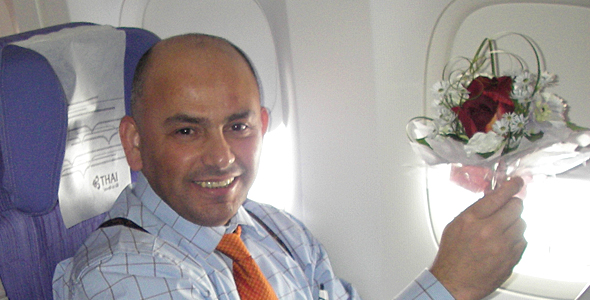 Mainali, a Nepalese migrant worker, was initially arrested in March 1997 due to an expired visa, but the police also then questioned him about the murder of a 39 year-old Japanese woman earlier that month. He was formally charged with that murder in May 1997.

The Tokyo District Court acquitted Mainali on 14 April 2000, however in December 2000, the Tokyo High Court subsequently overturned the decision, and sentenced him to life imprisonment for murder. Amnesty International had previously expressed concern that Mainali was denied the right to a fair trial.

Mainali has consistently maintained his innocence complaining that the Prosecutors withheld vital evidence in his favour, and in September 2010, prosecutors finally revealed they had kept frozen a piece of gauze containing semen taken from inside the victim's body. A fresh DNA analysis of the gauze matched the semen and hair found at the scene of the crime indicating the presence of an unidentified man. This raised serious questions about the prosecution’s case and Mainali’s conviction, and on 7 June 2012 the Tokyo High Court ordered his release and granted him a retrial.

However rather than accepting some responsibility for the errors that led to the miscarriage of justice, the prosecutors decided to appeal the High Court order, which was rejected today. Amnesty International is now concerned that the prosecutors will appeal against this latest decision, at the Supreme Court. Amnesty International therefore urges the prosecutors not to appeal against today’s High Court ruling, and to allow the retrial to take place, thereby hoping to rectify the miscarriage of justice against Govinda Prasad Mainali.

Although the High Court has ordered a retrial on issues relating to the investigation, Mainali’s case also highlights other fundamental flaws in Japan’s criminal justice system that remain unaddressed.

After the initial arrest in 1997, Mainali’s lawyers were not permitted to be present during interrogations. Under the daiyo kangoku (substitute prison) system, suspects are detained for up to 23 days with limited access to a lawyer. Lawyers are not permitted to be present during interrogations. In April 1997, one of Mainali’s lawyers tried to visit him at Shibuya Police Station but was refused access by the police, who said that he had been sent to the Prosecutor’s office in connection with the murder case. On arriving at the Prosecutor’s office, the lawyer was refused access once again and was told that his client was undergoing ‘voluntary’ interrogation.

Mainali told his lawyers that during interrogations conducted in detention during the pre-trial daiyo kangoku system, the police had shaken, pushed, beaten and kicked him and used a table to pin him against a wall.

Although the District Court ordered the authorities to pay 350,000 \en in damages for the denial of access to the lawyers, there was no independent investigation into Mainali’s complaints of ill-treatment.

Mainali’s case is the latest in a series of miscarriages of justice in Japan and also highlights the serious problems with Japan’s daiyo kangoku (substitute prison) system.

Amnesty International also calls therefore on the Japanese government to:

-Abolish or reform the daiyo kangoku system to bring into line with international standards;

-Ensure that detainees are entitled to have legal counsel present during interrogation sessions;

-In addition, establish audio and video surveillance of all areas of custody facilities where detainees may be present, except where this would violate detainees’ right to privacy or to confidential communication with their lawyer or with a doctor. Recordings should be kept in secure facilities for a reasonable period and in the event of a complaint be made available for investigators, individuals who have made a complaint and their representatives.

In 2009 Sugaya Toshikazu was acquitted after spending 17 years in prison for a crime he did not commit. Sugaya “confessed” to the crime after being interrogated by police under the daiyo kangoku system. He was acquitted after DNA evidence used to help convict him was found to be inaccurate. During his initial trial Sugaya retracted his “confession” claiming that he had been forced to confess.

Under the daiyo kangoku (substitute prison) system in Japan, suspects can be held for up to 23 days without charge. There are no rules or regulations regarding the length of interrogations carried out during this period and interrogation sessions are not fully recorded. In practice, it is not unusual for lawyers to be granted permission to talk with their clients only two to three days after applying for permission, and interviews are limited to only 15-20 minutes.

The Japanese justice system relies heavily on confessions, which are typically obtained while a suspect is held under the daiyo kangoku system. This system is routinely used to obtain ‘confessions’ through torture or other ill-treatment. Amnesty International has documented a variety of such measures, including beatings, intimidation, sleep deprivation, questioning from early morning until late at night, and making the suspect stand or sit in a fixed position for long periods.

In May 2007, the UN Committee Against Torture recommended that the Government of Japan ensure that defence counsel be present during interrogations; electronic and video recordings are made during all interrogations; and recordings are made available for use in criminal trials. The UN Human Rights Commission reiterated these recommendations in its concluding observations in October 2008. However, the Japanese government has yet to implement these recommendations.