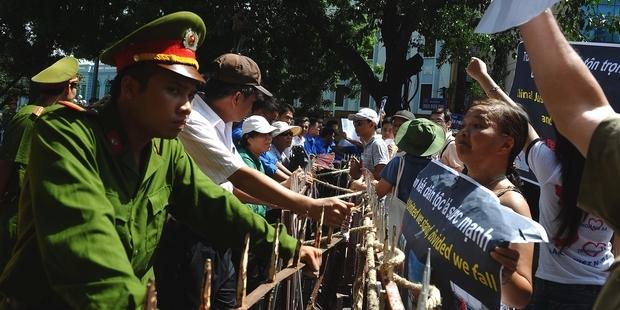 Vietnamese authorities are increasingly cracking down on freedom of expression.

Viet Nam’s government must halt its ongoing crackdown on freedom of expression and peaceful assembly, Amnesty International said today after mass arrests during a peaceful protest in the capital Ha Noi.

On 5 August, authorities in the capital arrested and detained around 30 people who were peacefully protesting against China’s territorial claims in the disputed South China Sea, known in Viet Nam as the East Sea.

Anti-corruption activist Le Hien Duc, 81, was among those rounded up, along with students and bloggers. They were held at local police stations and a so-called rehabilitation centre. All of those detained have now been released.

“This is the latest blow to freedom of expression in Viet Nam, with the authorities using short term arrests as a way of intimidating those who seek to protest peacefully”, said Rupert Abbott, Amnesty International’s Researcher on Viet Nam.

The mass arrests in Ha Noi followed news that there has been a further postponement in the trial of three well-known bloggers accused of anti-state propaganda.

The three bloggers are Nguyen Van Hai, known as Dieu Cay (“the peasant’s pipe”); former policewoman Ta Phong Tan, whose blog is called “Justice and Truth”; and Phan Thanh Hai, known as AnhBaSG. They are all founding members of the Free Vietnamese Journalists’ Club and used their blogs to promote human rights.

They are accused of conducting anti-state propaganda under Article 88 of Viet Nam’s Criminal Code, and face up to 20 years in prison if convicted.

“The three bloggers are prisoners of conscience, detained solely for the peaceful exercise of their right to freedom of expression through their online writings”, said Abbott.

“Amnesty International again calls on Viet Nam’s government to immediately and unconditionally release them,” he said.

Ho Chi Minh City’s People’s Court was due to try the three bloggers on 17 April this year. That trial was postponed, with a new court date set for 7 August.

But the trial has been further delayed, as authorities investigate the tragic death last week of Ta Phong Tan’s mother, Dang Thi Kim Lieng. She died after setting herself on fire outside government buildings in southern Bac Lieu province, in protest against the treatment of her daughter.

Because the bloggers have been detained for exercising their right to freedom of expression, their detention is arbitrary under international law. Their prolonged pre-trial detention, at least in the case of Dieu Cay and Phan Thanh Hai, who have both been held for 21 months, also contravenes national law, as Viet Nam’s Code of Criminal Procedure sets a maximum period of pre-trial detention of 16 months for those charged with “especially serious crimes”.

Clamping down on dissent

The right to freedom of expression is protected under Article 19 of the International Covenant on Civil and Political Rights, to which Viet Nam is a state party, and Article 69 of Viet Nam’s Constitution.

But while people in Viet Nam are increasingly trying to exercise this right, the authorities are harassing and imprisoning those who criticise government policies and advocate greater freedoms.

“The mass arrests of peaceful protestors in Ha Noi and the ongoing detention of the three bloggers sadly reflect the dire situation of freedom of expression in Viet Nam,” said Abbott.

“Viet Nam’s government must stop its crackdown on freedom of expression.”

Last year, 2011, at least 20 dissidents were put on trial for anti-state propaganda and other crimes, and received lengthy prison sentences. And at least 18 more individuals were arrested during that year and held in pre-trial detention on similar charges.

This year, the crackdown on freedom of expression has continued, with more trials and detentions.

In April, for example, police arrested Vietnamese-American academic Nguyen Quoc Quan at Ho Chi Minh City’s Tan Son Nhat airport. He is a member of the overseas-based Viet Tan party. The authorities allege that he was planning to “incite demonstrations” and are holding him on terrorism charges. He was convicted previously on charges related to his pro-democracy activism, in 2008.

In July, police surrounded monasteries of the banned Unified Buddhist Church of Vietnam to prevent members participating in anti-China demonstrations, and detained and interrogated blogger Huynh Thuc Vy in Ho Chi Minh City after she had taken part in those demonstrations. She was threatened with anti-state charges but then released.

Viet Nam has stated its intent to obtain a seat on the United Nations Human Rights Council. In response to China’s growing regional influence, it is strengthening its relationship with the United States and other countries.

Donor countries have urged Viet Nam’s government to improve its human rights record, with the United States demanding the release of Dieu Cay and the other bloggers.

“Amnesty International is calling on donor countries to prioritise human rights in their developing relationships with Viet Nam,” said Abbott.

“They must do all that they can to support those whose voices the Vietnamese authorities are trying to silence,” he said.