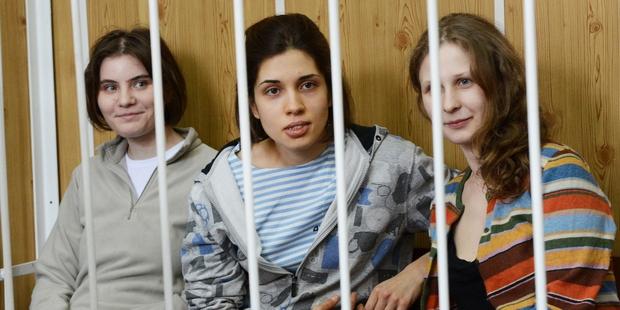 The Pussy Riot trial generated debate about freedom of expression, the place of the today's Church and the independence of courts ©NATALIA KOLESNIKOVA/AFP/GettyImages

The Pussy Riot trial generated debate about freedom of expression, the place of the today's Church and the independence of courts.

A Russian court's decision today to find guilty members of the punk rock protest band Pussy Riot is a bitter blow for freedom of expression in the country, Amnesty International said today.

Three members of the all-female group were charged with “hooliganism on grounds of religious hatred” after they sang a protest song in Moscow’s main Orthodox cathedral in February.

The judge sentenced them to two years imprisonment in a penal colony. The lawyers for the three said they were planning to appeal the decision.

Amnesty International said it believed that the trial of the Pussy Riot defendants ? Maria Alekhina, Ekaterina Samutsevich and Nadezhda Tolokonnikova ? was politically motivated, and that they were wrongfully prosecuted for what was a legitimate ? if potentially offensive ? protest action.

The organization considers all three activists to be prisoners of conscience, detained solely for the peaceful expression of their beliefs.

“The Russian authorities should overturn the court ruling and release the members of Pussy Riot immediately and unconditionally,” said John Dalhuisen, Director of Amnesty International's Europe and Central Asia Programme.

“What Maria Alekhina, Nadezhda Tolokonnikova and Ekaterina Samutsevich did was calculated to shock - and did shock many. But in sentencing them to two years’ imprisonment, Russia has set the limits of freedom of expression in the wrong place.”

“A number of measures restricting the freedom of expression and association have been introduced in response to the wave of protest that accompanied the recent parliamentary and presidential elections. This trial is another example of the Kremlin’s attempts to discourage and delegitimize dissent.  It is likely to backfire.”

Pussy Riot performed the protest song “Virgin Mary, redeem us from Putin” in Christ the Saviour Cathedral in Moscow on 21 February, with the group members covering their faces in balaclavas.

The song called on the Virgin Mary to become a feminist and banish Vladimir Putin. It also criticised the dedication and support shown to Putin by some Russian Orthodox Church representatives. It was one of a number of performances intended as a protest against Vladimir Putin in the run-up to Russia’s presidential elections in March.

The Russian authorities subsequently arrested Maria Alekhina and Nadezhda Tolokonnikova on 4 March, and Ekaterina Samutsevich on 15 March, claiming they were the masked singers.

The Pussy Riot trial started on 30 July in Moscow's Khamovnicheskii District Court and was over in eight days. The judge dismissed most of the defence team’s requests to call up witnesses. There were concerns that fair trial standards might have been violated.

The case generated a wide debate on blogs, social networks and in the media about freedom of expression, the place of the Church in a modern secular state and the independence of courts.

In June, more than 200 Russian cultural figures, well-known writers, musicians and actors, among others, signed an open letter in support of Maria Alekhina, Nadezhda Tolokonnikova and Ekaterina Samutsevich. It was then posted on the Echo Moskvy radio web site and collected around 45,000 further signatures.

Also in June, a group of Orthodox believers sent an open letter to Patriarch Kirill, the leader of the Russian Orthodox Church, asking for mercy for the three arrested women.

In August, a group of lawyers published an open letter in which they stated that the actions of the three women could not be qualified as a crime and that bringing charges against them was in violation of the Russian law.

The Pussy Riot case received a broad coverage abroad and generated the support of many international artists, including Sting, Madonna, Yoko Ono and Bjork.