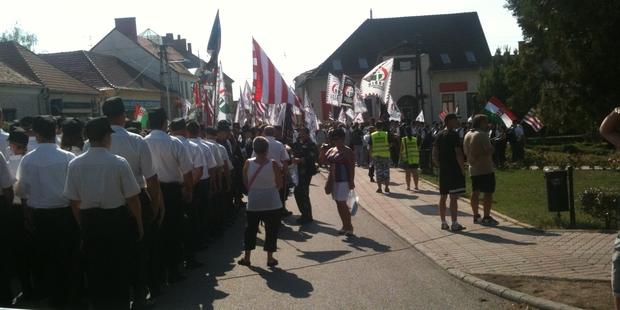 More than 1,000 people gathered in Devecser on 5 August at a demonstration organized by far-right party Jobbik

The Hungarian authorities must do more to protect the country's Roma communities, Amnesty International said in a letter to the government today, after reports that far-right groups attacked Roma residents in the western village of Devecser.

Violence broke out on 5 August, when more than 1,000 people gathered in Devecser's main square at a demonstration organized by far-right party Jobbik and joined by far-right vigilante groups.

According to eyewitnesses some members of the crowd chanted anti-Roma slogans and threw pieces of concrete and other missiles at Roma houses. The police did not act to stop the violence and it is unclear whether any arrests were made.

"The Hungarian authorities are obliged to protect all citizens and must therefore ensure that a thorough, independent and prompt investigation is carried out into the allegations that police did not intervene to prevent the violence in Devecser," said Jezerca Tigani, Deputy Director of Amnesty International's Europe and Central Asia Programme.

According to media reports, Jobbik called the march following a ‘brawl’ in late July between members of two households, one Roma and the other non-Roma.

A number of speeches were made by Jobbik MP Gabor Ferenczi, Laszlo Toroczkai of the vigilante group Sixty-Four Counties and Attila Laszlo of the For a Better Future Civil Guard Association.

Eyewitnesses said that all speeches contained anti-Roma sentiments, and that some were even calling for Hungarians to fight and indirectly urging the eradication of "parasite Gypsies".

Zsolt Tyirityan of the group Betyarsereg (Outlaw Army) in particular is reported to have made openly racist comments.

"Derogatory or racist comments made in particular by public officials or politicians amount to incitement to racial hatred," said Jezerca Tigani.

"Perpetrators of any acts of incitement to racial hatred must be prosecuted under laws which provide penalties reflecting the gravity of the abuse."

Video footage posted on You Tube appeared to confirm reports that pieces of concrete and other missiles were being thrown at the Roma houses.

One activist told Amnesty International that she was in the courtyard of one Roma house when it was attacked. The crowd started chanting anti-Roma slogans and threw bottles, stones and pieces of concrete. She was hit in the arm and injured by a piece of concrete and has since filed a criminal complaint with the police.

In an open letter to Hungary's Minister of Interior and the national chief of police about the violence in Devecser three Hungarian NGOs said that "by not dispersing the demonstration, the police failed to ensure the rights to freedom, equality and security of the local inhabitants."

The Hungarian Civil Liberties Union (TASZ), the Hungarian Helsinki Committee and the Eotvos Karoly Institute (EKINT) said that the speeches were calling for crimes to be committed and for the restriction of others' freedoms. The groups called for an investigation into police misconduct and for the public to be informed about its findings.

Amnesty International previously wrote to the Hungarian government in April this year, voicing its concerns over a report by the Parliamentary ad-hoc Committee into the activities of far-right vigilantes in the village of Gyongyospata in March 2011, which failed to address the human rights abuses suffered by the Romani residents.

Following a march on the village organized by Jobbik and attended by up to 2,000 people, three vigilante groups patrolled the village for almost a month. During this time, they threatened, intimidated and harassed Romani residents.

"The recent events in Devecser indicate that, despite the Parliamentary ad-hoc Committee’s report, such incidents continue to occur without the authorities fulfilling their duty to prevent such attacks and protect those who are targeted by violence," said Jezerca Tigani.

In October 2010, Devecser was one of the villages worst affected when a flood of toxic red sludge escaped from a mining plant and flowed into major waterways.

The sludge swept cars from roads and damaged bridges and houses, forcing the evacuation of hundreds of residents.