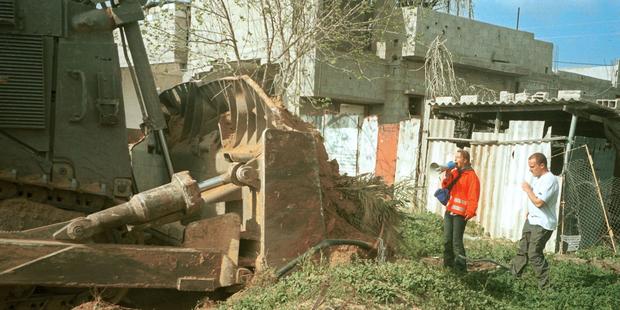 Amnesty International condemns an Israeli court’s verdict that the government of Israel bears no responsibility in the death of Rachel Corrie, saying the verdict continues the pattern of impunity for Israeli military violations against civilians and human rights defenders in the Occupied Palestinian Territories (OPT).

“Rachel Corrie was a peaceful American protester who was killed while attempting to protect a Palestinian home from the crushing force of an Israeli military bulldozer,” said Sanjeev Bery, Middle East and North Africa advocacy director for Amnesty International USA.

“More than nine years after Corrie’s death, the Israeli authorities still have not delivered on promises to conduct a 'thorough, credible and transparent' investigation. Instead, an Israeli court has upheld the flawed military investigation and issued a verdict that once again shields the Israeli military from any accountability."

The verdict, issued by Judge Oded Gershon in the Haifa District Court, maintains that the Israeli military is not responsible for "damages caused" because the D9 Caterpillar bulldozer was engaged in a combat operation in Rafah in the southern Gaza Strip on 16 March, 2003.

International humanitarian law prohibits the destruction of property unless required by imperative military necessity, and requires that in any military operation, constant care is taken to protect civilians.

“Rachel Corrie was clearly identifiable as a civilian, as she was wearing a fluorescent orange vest when she was killed,” said Bery.

“She and other non-violent activists had been peacefully demonstrating against the demolitions for hours when the Israeli military bulldozer ran over her.”

By upholding the flawed Israeli military investigation, completed within one month of Rachel Corrie’s death in 2003, the verdict seems to have ignored substantial evidence presented to the court, including by eyewitnesses. The full military investigation has never been made public, but US government officials have stated that they do not believe the investigation was 'thorough, credible and transparent.'

Amnesty International has made similar criticisms of Israel’s system of military investigations for many years. For example, the organization has monitored the investigations carried out by IDF commanders and the Israeli military police into violations during Operation "Cast Lead", launched by Israeli forces on 27 December 2008, in which hundreds of unarmed civilians in the Gaza Strip were killed.

Israel’s military investigations have lacked independence, impartiality, transparency, appropriate expertise and sufficient investigatory powers. The failure of both Israel and the Hamas de facto administration to conduct credible investigations into violations committed during the conflict led Amnesty International to call for the Gaza situation to be referred to the International Criminal Court.

Palestinian civilians from the OPT are killed or injured by the Israeli military all too frequently, but they face significant barriers in accessing Israeli civil courts, which means that Israeli civil courts rarely examine the killings of civilians in the OPT, particularly those in Gaza. Steep court fees required of claimants before the case can begin are beyond the means of most Palestinians. As part of Israel’s continuing closure of the Gaza Strip, the Israeli authorities deny Palestinian victims or witnesses from Gaza permission to enter Israel to testify in court, lawyers from Gaza cannot represent clients before Israeli courts, and Israeli lawyers cannot enter Gaza to meet with clients.

Amnesty International has repeatedly condemned Israel’s policy of demolishing homes and other structures in the OPT, but demolitions are still routine in the occupied West Bank. More than 600 structures were demolished in 2011, resulting in the forcible eviction of almost 1,100 people. In the first seven months of 2012, the Israeli military demolished 327 structures in the West Bank, displacing 575 people, according to the UN Office for the Coordination of Humanitarian Affairs.