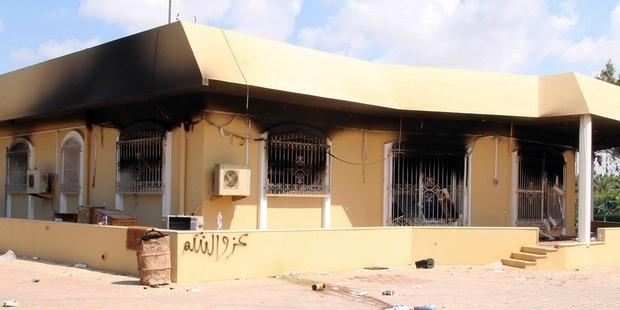 An attack on the US Consulate in Benghazi, Libya, killed at least four people including a US Ambassador.© STRINGER/AFP/GettyImages

The killing of at least four people including the US Ambassador to Libya, J Christopher Stephens, in an attack on the US consulate compound in Benghazi that left several more injured is an inexcusable act and the perpetrators must be brought to justice, Amnesty International said.

According to information gathered by Amnesty International, attacks against the US consulate in Benghazi in eastern Libyan by armed men began in the evening of 11 September and lasted for some two hours.

Attackers are believed to have used RPGs and anti-aircraft weapons and continued to target consulate staff as they attempted to flee and make their way to the compound that houses their living quarters.

The attacks resulted in the death of at least four people including the US Ambassador who was on a visit to Benghazi at the time. Police and other security officers were reportedly overwhelmed and fled the scene.

“We condemn this calculated attack on civilians as they attempted to flee to safety from the US consulate. There can be no justification for such an attack, and the perpetrators must be brought to justice,” said Suzanne Nossel, Executive Director of Amnesty International USA.

The Libyan Ministry of Interior has publicly said the attacks are linked to protests that broke out after clips from a film made by a US-based anti-Islam propagandist were translated into Arabic and posted on the internet.

The clips depict the prophet Muhammad and other figures revered by Muslims in an insulting manner and it has deeply offended many Muslims.

“However offensive this film may be it can in no way excuse such killings and violent attacks. While religion and culture are of central importance to many people’s lives, they cannot be a justification for abusing human rights,” said Hassiba Hadj Sahraoui, Deputy Director for the Middle East and North Africa at Amnesty International.

“The attacks once again exemplify the need for the Libyan authorities to rein in armed groups and militia acting above the law.”

In a recent statement, the General National Congress (GNC) expressed its commitment to criminalize and punish acts of unlawful killings, torture and general lawlessness.

However, a year after Tripoli fell to revolutionary fighters, armed groups have continued to commit human rights violations including unlawful killings, arbitrary arrests and detention, torture and forcible displacement. Perpetrators of such acts continue to go unpunished. (Link to report)

The Libyan authorities must conduct a full, independent and impartial investigation and bring those responsible for the killings to justice in fair trials and with no possibility of the death penalty

States must protect the lives and safety of all people within their jurisdiction. In doing so, they must adhere strictly to international human rights law and standards, including respecting the right to freedom of peaceful assembly and implementing proportionate law enforcement measures to maintain public order.

“The recent attacks and continuing human rights violations by armed groups and the state’s failure to protect civilians and enforce national and international law casts a shadow on the future of Libya,” said Hassiba Hadj Sahraoui.

“There is a real risk that the very abuses that inspired the ‘17 February Revolution’ are being reproduced and entrenched.