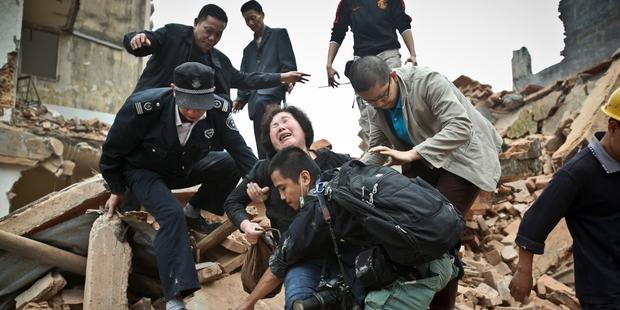 Violent forced evictions are on the rise in China. © Benjamin gz - Imaginechina

Violent forced evictions inChina are on the rise as local authorities seek to offset huge debts by seizing and then selling off land in suspect deals with property developers, Amnesty International said as it urged government action.

In a new 85-page report, Standing Their Ground, Amnesty International highlights how forced evictions - a longstanding cause of discontent within China - have increased significantly in the past two years in order to clear the way for developments.

Local governments have borrowed huge sums from state banks to finance stimulus projects and now rely on land sales to cover the payments.

This has resulted in deaths, beatings, harassment and imprisonment of residents who have been forced from their homes across the country in both rural and urban areas.

Some were in such despair they set themselves on fire in drastic protests of last resort.

However, China’s ruling Communist Party continues to promote local officials who deliver economic growth, regardless as to how it is achieved. Land re-development, at whatever cost- whether for new roads, factories or residential complexes - is seen as the most direct path to visible results.

“The Chinese authorities must immediately halt all forced evictions. There needs to be an end to the political incentives, tax gains and career advancements that encourage local officials to continue with such illegal practices,” said Nicola Duckworth, Senior Director of Research at Amnesty International.

Of 40 forced evictions that Amnesty International examined in detail as part of the research, nine culminated in the deaths of people protesting or resisting eviction.

In one case a 70-year-old woman, Wang Cuiyan, was buried alive by an excavator on 3 March 2010 when a crew of about 30 to 40 workers came to demolish her house in Wuhan city, Hubei Province.

Local officials continue to sanction or turn a blind eye to the harassment of residents by developers using ruthless tactics to force people out of their homes and sell their rights to land-use.

Proper consultation or notice as required under international law as well as adequate alternative housing are seldom given and any compensation falls far short of the true market value.

Residents come under concerted campaigns including the cutting off of essential services like water and heating. Civil servants who oppose land deals often face reprisals.

One violent example occurred on 18 April 2011 when a few hundred men entered Lichang village in Jiangsu Province and attacked farmers to force them off their land. About 20 women from the village were dragged away and beaten.

On 21 June 2011, police in Wenchang city, Sichuan province even took custody of a 20-month old baby and refused to return him until his mother signed an eviction order.

People who stage resistance to forced evictions often end up in jail or in Re-education Through Labour (RTL) Centres.

In one case, authorities in Shandong province assigned Li Hongwei, a victim of forced eviction, to 21 months RTL detention for delivering two protest speeches in a plaza in May last year.

In Hexia township Jiangxi province, a woman was beaten and forced to undergo sterilization, on 17 May 2011 after she had petitioned the authorities about her eviction, whilst other residents that accompanied her were beaten. Amnesty International considers such forced sterilization to be an act of torture.

The lack of independence inChinese courts means those that seek to challenge an eviction or seek redress have little hope of gaining justice. Lawyers are also reluctant to take on such clients for fear of the repercussions.

With no access to justice some have turned to violence or even self-immolation as a last resort.

Amnesty International collected reports of 41 cases of self-immolation from 2009 - 2011 alone due to forced evictions. That compares to fewer than 10 cases reported in the entire previous decade.

Forced evictions remain one of the greatest issues of popular discontent within China. Premier Wen Jiabao has acknowledged the gravity of the situation and there has been some progress towards protecting people against forced evictions in line with international law and standards.

For the first time, new regulations adopted in 2011 state that compensation for homeowners must not be lower than market value and outlawed the use of violence.

However, these laws and regulations still fall far short of the required standards and apply only to city dwellers.

Rural communities remain vulnerable to forced evictions, particularly those close to urban areas. With urbanization happening so quickly around them, and compensation based on the agricultural value rather than the true market value, farmers are often priced out of the communities they have lived in their whole lives.

Another major weakness in the latest regulations is that they only provide protections for owners of land, overlooking the rights of tenants.

Forced evictions - the removal against their will of individuals, families or communities from the homes or the land they occupy without access to legal or other protections -are banned under international law.

Amnesty International is calling on the authorities to immediately halt all forced evictions and ensure adequate safeguards are put in place in line with international law, including: