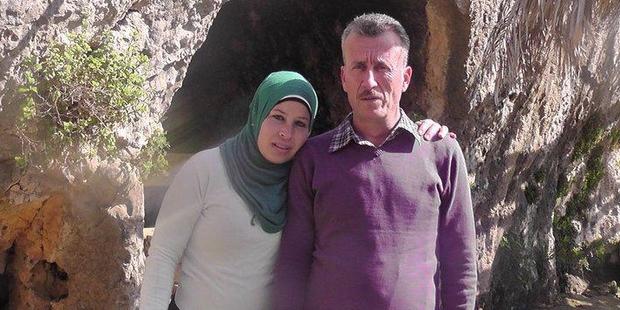 Nariman Tamimi, Bassem's wife said that "the police were brutal" during his arrest (C)private

The Israeli military authorities must end their campaign of harassment, intimidation and arbitrary detention against a Palestinian activist in the occupied West Bank, Amnesty International said.

Bassem Tamimi, who has been detained since his arrest at non-violent protest against the encroachment of Israeli settlers onto Palestinian land last week, faces a further prison sentence after appearing before the Ofer Military Court on Wednesday.

"Once again, Bassem Tamimi is being held solely for peacefully exercising his rights to freedom of expression and assembly. We believe he is a prisoner of conscience and should be released immediately and unconditionally," said Ann Harrison, Deputy Middle East and North Africa Programme Director at Amnesty International.

Tamimi was arrested on 24 October following a non-violent demonstration in a supermarket in Sha’ar Benjamin settlement north of Ramallah. More than 100 protesters had gathered to call for an end to the occupation and a boycott of all Israeli products.

He faces charges of assaulting a police officer, participation in an unlicensed demonstration, and activity against the public order.

If convicted of either of the latter two “offences”, he will also have to serve one or more suspended sentences from a previous trial: two months for participation in an unlicensed demonstration, and 17 months for “activity against the public order”.

After viewing footage of the protest, the military judge ruled that he should be released to house arrest for the duration of legal proceedings. The military prosecution is appealing this decision, and he remains at Ofer prison.

Tamimi was previously sentenced in May 2012 to 13 months in prison for his role in organizing regular non-violent protests against Israeli settlements in the West Bank. At the time, Amnesty International considered him to be a prisoner of conscience, and called for his immediate and unconditional release.

The establishment and expansion of Israeli settlements in the occupied West Bank violates international humanitarian law.

According to eyewitness and media reports, as the protesters left the supermarket on 24 October they were beaten by Israeli police and security forces who also fired stun grenades.

Bassem's wife Nariman Tamimi attended the protest and told Amnesty International: "The police were brutal during the arrest. They threw Bassem on the ground and pressed him down while putting the cuffs on his hands. Anyone who tried to approach them was beaten up. The police seemed scared and nervous. They wanted to make arrests fast."

Despite the police use of unnecessary and excessive force, the military prosecution has charged Bassem Tamimi with assault, based on the testimony of one police officer who alleges that the activist hit him on the hand.

Amnesty International spoke to witnesses and reviewed numerous videos from the protest, and found no evidence that he or the other protesters used violence. Tamimi is committed to non-violent resistance and has a long record of peaceful protest. Another Palestinian protester, now released on bail, faces similar charges.

Tamimi managed to contact his wife after his arrest.

"He still had his phone with him, he told me that he was in a cell somewhere, and he said that he felt like there was something broken in chest, he said 'I cannot move or breathe and I am very tired'. Then they took the phone away so we could not talk more," she told Amnesty International.

Bassem Tamimi is from the West Bank village of al-Nabi Saleh, 21km northwest of Ramallah.

In July 2008 Israeli settlers from nearby Halamish began to use the Qaws spring, which is on al-Nabi Saleh land and used to irrigate crops there and in the nearby village of Deir Nitham. In February 2009 settlers began to build structures on the spring site.

The Palestinians complained that settlers were building on private Palestinian land, and that the work damaged other property including trees. Israeli police routinely close Palestinian complaints against settlers due to "lack of evidence".

Israel’s Civil Administration, the military body which controls most of the West Bank, prohibits Palestinians from visiting the Qaws spring site in groups and on Fridays, while settlers are allowed unfettered access.

Weekly demonstrations began on 9 December 2009. Every Friday residents of al-Nabi Saleh and solidarity activists gather around noon in the village centre and march peacefully towards the spring. They have been met repeatedly with unnecessary and excessive force by the Israeli army including the use of stun grenades, pepper spray, batons and guns.

Demonstrations are dispersed as soon as they begin and are usually not allowed to reach the spring. The Israeli army raids the village regularly, usually during the night, and conducts house searches and arrests, including the arrest of children under the age of 15.

Israeli military laws in place in the West Bank impose sweeping and arbitrary restrictions on freedom of expression and peaceful assembly, requiring people to obtain advance permission from the Israeli military for any proposed gathering of 10 or more persons “for a political purpose or for a matter that could be interpreted as political”.

Nariman Tamimi told Amnesty International that in al-Nabi Saleh and all areas where there is popular resistance, police use extreme violence, noting that "there is nothing [to the protests] except that you chant and express your opinion."

As one of the organizers of the al-Nabi Saleh protests and a coordinator of the village's popular committee, Bassem Tamimi and his family have been the target of harsh treatment by the Israeli army.

Since the demonstrations began, his house has been raided and ransacked numerous times. His wife has been arrested twice and two of his children have been injured ? Wa'ed was in hospital for five days after he was hit in the leg by a rubber bullet and Mohammed was injured by a tear-gas canister that was shot directly at him and hit him in the shoulder.

Bassem Tamimi has been arrested by the Israeli army 11 times to date, though he has only once been convicted by a military court - on charges that Amnesty International believes were unfounded.