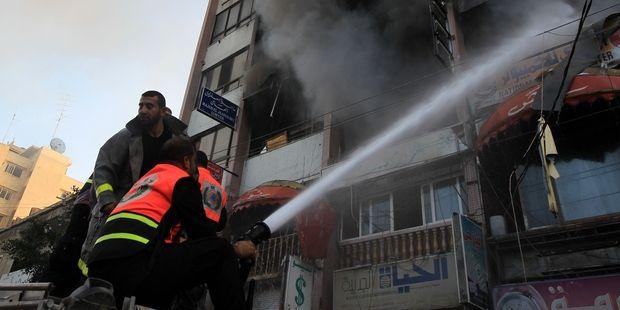 The Israeli military has attacked government and media buildings © AFP/Getty

As the conflict escalates between Israel and Palestinian armed groups in Gaza, Amnesty International is calling for an international arms embargo and for the immediate deployment of international monitors.

Since 14 November, dozens of civilians in Gaza and three Israeli civilians have been killed. Both sides have been violating international humanitarian law, according to information gathered by the UN, local human rights organizations and Amnesty International.

“International monitors with the ability to investigate human rights violations and violations of international humanitarian law need to be on the ground as soon as possible in both Gaza and Israel to carry out independent, impartial assessments of violations by both sides,” said Ann Harrison, Amnesty International’s Middle East and North Africa Deputy Director.

“The UN Security Council should meet urgently to impose an international arms embargo on Israel, Hamas, and Palestinian armed groups in Gaza.”

Pending such an embargo, all states should immediately suspend transfers of weapons, munitions and related equipment to Israel, the Hamas de facto administration, and Palestinian armed groups in Gaza.

The Israeli military reports that it has attacked more than 1,350 targets in the Gaza Strip since 14 November. Israeli military forces have fired artillery into densely populated residential areas, attacked government and media buildings, and bombed the family homes of members of Palestinian armed groups, killing and wounding Palestinian civilians.

By Monday afternoon, Amnesty International had collected the names of 66 civilians killed in Gaza, including 17 children and 9 women. The Palestinian Center for Human Rights reported at noon on Monday that 622 civilians in Gaza had been injured, including 175 children and 107 women, many of them severely.

“The number of civilian deaths in Gaza raises stark questions about the extent to which Israeli forces are fulfilling their obligations to protect civilian lives,” said Ann Harrison.

“We have serious concerns that some civilians in Gaza have been killed or injured as a result of indiscriminate or disproportionate attacks by Israeli forces.”

Palestinian armed groups have fired more than 1,100 rockets into Israel since 14 November. Most of the rockets cannot be targeted and some have been fired from civilian areas.

These unlawful attacks have killed three Israeli civilians and injured at least 51, two of them severely, according to Magen David Adom, the Israeli branch of the International Red Cross and Red Crescent Movement.

Some of the rockets have landed within the Gaza Strip itself, resulting in civilian casualties.

“All members of the international community should urge both sides to prioritise the protection of civilians and strictly adhere to international humanitarian law. The silence of some highly influential states has been deafening.”

Amnesty International is also extremely concerned by reports that Hamas’ military wing carried a summary killing  of a suspected collaborator in Gaza on 16 November.

Hospitals in Gaza are struggling to cope with the emergency situation, exacerbated by pre-existing shortages due to the Israeli blockade imposed since June 2007. Before the current round of hostilities, they already lacked 40 per cent of the essential medicines list, according to the World Health Organization.

Amnesty International has repeatedly condemned the blockade of the Gaza Strip as collective punishment of Gaza’s 1.6 million residents and called for it to be completely lifted.

There has been no accountability for war crimes committed by all sides during the 2008-2009 Gaza/Israel conflict, which were documented by Amnesty International and the UN Fact-Finding Mission headed by Justice Richard Goldstone.

Amnesty International has called repeatedly for the UN General Assembly to refer the Fact-Finding Mission’s report, known as the “Goldstone report” to the Security Council so that it could consider referring that situation to the Prosecutor of the International Criminal Court to investigate war crimes by both sides.

Such an investigation would cover war crimes and possible crimes against humanity by all sides during the 2008-2009 conflict, in which some 1,400 Palestinians were killed, including some 300 children and hundreds of other unarmed civilians. Three Israeli civilians were also killed in the conflict.

Since the end of the 2008-2009 conflict, Amnesty International has condemned the continued firing of indiscriminate rockets from Gaza as well as Israeli military strikes on Gaza which have killed and injured civilians.

The lack of impartial and effective investigations into past crimes raises concerns that patterns of violations will be repeated and victims of crimes in the present conflict may be left without access to justice and reparation.