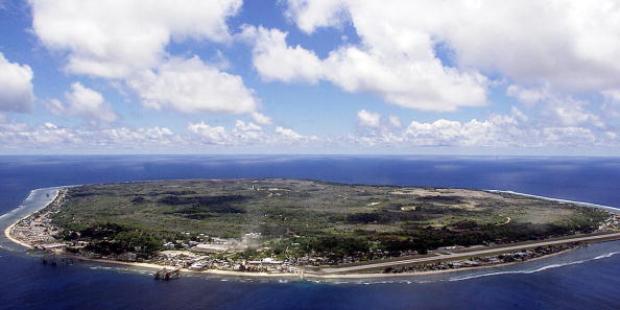 The Pacific Island of Nauru where aslyum seekers are being detained. (c) AFP/Getty Images

A toxic mix of uncertainty, unlawful detention and inhumane conditions are creating an increasingly volatile situation at Australia’s offshore asylum detention camp on Nauru, with the government spectacularly failing in its duty of care, Amnesty International said on Friday.

Following a three-day inspection on the Pacific island, Amnesty International researchers found the processing facility for asylum seekers totally inappropriate and ill-equipped, with 387 men cramped into five rows of leaking tents, suffering from physical and mental ailments, creating a climate of anguish as the repressively hot monsoon season begins.

“The situation on Nauru is unacceptable. The unlawful and arbitrary detention of these men in such destitute conditions is cruel, inhuman and degrading,” said Amnesty International’s Refugee Expert Dr Graham Thom.

“The climate of uncertainty was debilitating with no information being provided to asylum seekers and clear evidence that this temporary holding facility has been erected in haste, with no consideration for the individuals languishing in such squalid conditions.

“On our final day speaking with the detainees, the downpour was torrential, the site was flooded, tents were leaking - one man’s shoes drifted away as the current ran through the tent. We were also prevented from photographing conditions despite assurances we would be able to do so.”

“The news that five years could be the wait time for these men under the government’s ‘no advantage’ policy added insult to injury, with one man attempting to take his life on Wednesday night,” said Dr Thom.

Amnesty International is calling on the Australian government to immediately cease transfers to Nauru as the human rights organization can see no purpose in holding asylum seekers on Nauru other than penalizing them for seeking asylum.

“For those already on Nauru, processing must start immediately, with freedom of movement allowed as envisaged by the refugee expert panel so that at least some uncertainty is addressed and these men can live some semblance of a normal life.

“Offshore processing on Nauru and Manus Island will only serve to break vulnerable people in these ill-conceived limbo camps, who have fled unimaginable circumstances,” said Dr Thom.

Amnesty International is also gravely concerned by the proposal of Australia's political opposition coalition to cut the increased humanitarian intake.

The human rights organization believes the only way of preventing asylum seekers from taking dangerous boat journeys to Australia is to provide them with viable alternatives.

This includes building the capacity of Australia’s neighbouring countries to respect refugee rights as well as Australia increasing its humanitarian intake.

Once again Amnesty International reiterates that seeking asylum is a fundamental legal and human right. Any attempts to portray their arrival as illegal is grossly misleading.