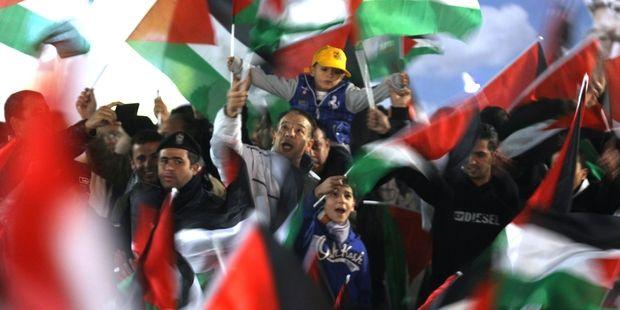 Celebrations in Ramallah, West Bank, after the UN vote© AFP/Getty

Palestine's historic recognition as a non-member observer state of the United Nations brings with it obligations under international law, Amnesty International said today.

The vote at the UN General Assembly in New York on Thursday was decided by 138 votes in favour, 41 abstentions, and 9 against.

"This would open the door for victims of human rights abuses to seek justice and empower them to claim their rights.," said Widney Brown, Senior Director of International Law and Policy at Amnesty International.

“In particular, it should advance efforts to ensure international justice for war crimes and possible crimes against humanity committed by all sides in the 2008-2009 conflict in Gaza and southern Israel.”

"Palestine should promptly accede to the Rome Statute affirming that it accepts the ICC’s jurisdiction over crimes committed since 1 July 2002.  It should also accede to related treaties and agreements."
"The victims who suffered during the 2008-2009 conflict have waited too long for justice.  Palestine should act quickly to ensure justice is no longer delayed." said Brown.

Unacceptable pressure to renounce justice
Amnesty International is concerned at reports that several states, including the United Kingdom and the USA, put pressure on Palestinian diplomats to renounce accountability mechanisms for crimes under international law.

“Victims’ access to justice is not something to be bartered away,” said Brown.

“This attitude is particularly alarming in light of reported violations of international humanitarian law committed in Gaza and Israel during recent hostilities between Israel and Palestinian armed groups.”

Amnesty International has condemned the continuing failure by both the Hamas de-facto administration in Gaza and by Israel to conduct prompt, thorough, independent and impartial investigations of suspected crimes committed during the 2008-2009 conflict..

Also of particular concern are the threats by Israel that it will withhold money due to the Palestinian Authority because of the UN vote on Palestinian statehood.

Restrictions on movement of goods and people by Israel have already put a stranglehold on the Palestinian economy and forced many Palestinians into dependence on humanitarian aid.

Amnesty International has repeatedly urged Israel to lift completely its blockade on Gaza, which imposes a collective punishment on more than 1.4 million Palestinians in clear violation of international law.

"Withholding money or resources will exacerbate the humanitarian situation,” said Brown. “Under international law, Israel, as the occupying power, is forbidden from using collective punishment and is responsible for the welfare of those occupied .”

In January 2009, in the aftermath of the 22-day conflict in Gaza and southern Israel, the Palestinian Authority submitted a declaration invoking Article 12 (3) of the Rome Statute to the ICC stating that it recognized the ICC’s jurisdiction over crimes under international law committed during this armed conflict with the intention of enabling the Office of the Prosecutor to conduct a preliminary examination of those crimes. On 3 April 2012, the Office of the Prosecutor concluded that it was unable to proceed with investigating and prosecuting these crimes unless the relevant UN bodies (in particular, the Secretary General and General Assembly) or the ICC Assembly of States Parties (made up of 121 states that have ratified the Rome Statute) decide that Palestine qualifies as a state within the meaning of the provision under which the Palestinian Authority had lodged the declaration.

Amnesty International has repeatedly called for the UN General Assembly to refer the Fact-Finding Mission’s report on the 2008-2009 Gaza-Israeli conflict to the UN Security Council so that it could consider referring that situation to the Prosecutor of the ICC to investigate crimes under international law by both sides.