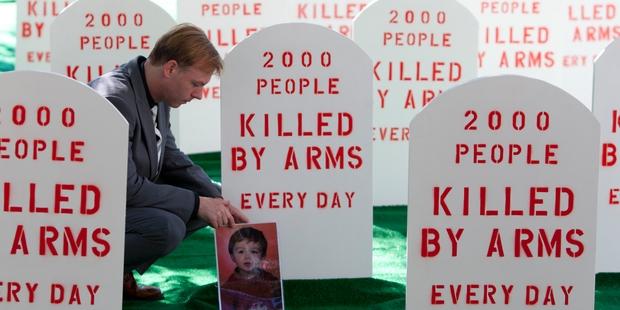 he UN vote paves the way for a Final Conference on the Arms Trade Treaty to take place in New York in March 2013.© Control Arms/ Andrew Kelly

A historic treaty to regulate the global arms trade has won the backing of an overwhelming majority of states in a move Amnesty International called a potential victory for human rights worldwide.

In the biggest show of support so far, 157 states at the UN General Assembly’s First Committee on Disarmament in New York voted on Wednesday in favour of finalizing the Arms Trade Treaty (ATT) next March.

Among the "big six" arms-exporting countries, only Russia abstained from voting on Wednesday. China joined France, Germany, the United Kingdom and the USA in supporting the resolution.

“After today’s resounding vote, if the larger arms trading countries show real political will in the negotiations, we’re only months away from securing a new global deal that has the potential to stop weapons reaching those who seriously abuse human rights,” said Brian Wood, Arms Control Manager at Amnesty International.

Even before the vote, 105 states from all world regions endorsed the resolution which was co-authored by seven governments ? Argentina, Australia, Costa Rica, Finland, Japan, Kenya and the United Kingdom ? and co-sponsored by at least 98 other states.

No state voted against the resolution, although Iran tried to alter it to prevent the current draft treaty text from being used as a basis to complete the negotiation ? no other government supported such a move.

This is the final leg of a 17-year campaign by Amnesty International and its partners to achieve an arms trade treaty to help protect people on the ground who, time and again, have borne the brunt of human rights violations during armed repression, violence and conflicts around the globe.

This resulted in a historic Arms Trade Treaty Conference which produced the current draft treaty text in July 2012.

Although a handful of countries held up the negotiations and the text’s adoption in July, governments supportive of the treaty are using the delay to hammer out technical issues, such as potential loopholes regarding defence cooperation agreements and the transit of international arms shipments.

“We know sceptics will keep trying to undermine the human rights rules in the final treaty, but Amnesty International and its partners will keep up the pressure to secure the strongest possible text that protects human rights,” said Wood.

arms producer and exporter ? will support a reasonably strong treaty next March.

But the USA has previously tried to weaken the human rights rules and the scope of the treaty ? by excluding ammunition, and by only favouring watered-down rules on key issues covered in the text.

Final conference on the ATT

If the March Conference fails to finally adopt the treaty text, it will almost certainly be tabled by a large majority for adoption by a vote in the UN General Assembly. After being adopted, the ATT is expected to come into force after being ratified by 65 states.

“This treaty won’t be a panacea ? unscrupulous governments will try to bend and ignore the new rules, but global civil society and governments supporting the rule of law and human rights will hold them to account and keep working to improve the treaty rules on critical issues, such as sea and air drones and laser weapons,” said Wood.

“The Treaty should not be a frozen tablet. When it enters into force, a robust Arms Trade Treaty could be the starting shot for a new global process that can be further strengthened to really protect people on the ground.”