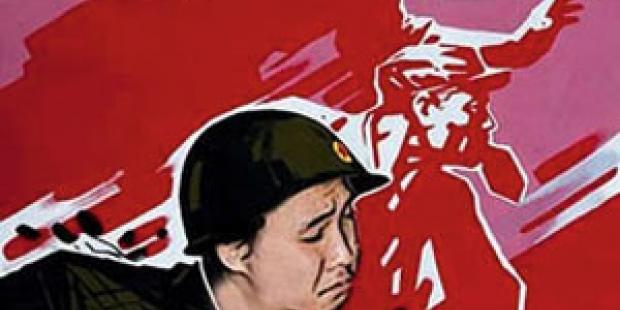 A picture mocking a North Korean Soldier. Park Junggeun, who posted this on Twiiter, was sentenced to 10 months in prison for “supporting and joining forces with an antistate entity”.(C)AI

South Korea has seen a dramatic increase in the abuse of national security laws in a politically motivated attempt to silence debate, Amnesty International said on Thursday.

A new report shows a 95.6% increase over the past four years (2008 to 2011) in the number of people questioned on suspicion of violating the National Security Law [NSL].

Figures released by the National Prosecutors Office show the number of new cases under the NSL rose from 46 in 2008 to 90 in 2011.  The majority were accused of posting pro North Korean content online. Eighteen websites were closed for such content in 2009, rising to 178 by October 2011.

The report highlights a new trend in the authorities using the NSL to encroach into more and more aspects of public and private life without justification.

Vaguely worded clauses in the law are being used to target arbitrarily individuals and groups perceived to be critical of the government and especially their policies on North Korea.

Individuals that use social media as a platform for discussion on issues like North Korea are increasingly at risk of criminal investigation and prosecution.

“The NSL is being used as a smoke screen to hound critics of the government, with serious consequences for those targeted,” said Rajiv Narayan, Amnesty International’s East Asia Researcher.

“No one is denying the right of South Korea to ensure the security of its citizens. But that is not what is being witnessed with the arbitrary and widening application of the NSL. Such abuse has to end.”

Amnesty International has written to all candidates in the imminent Presidential election urging them to commit to abolish or fundamentally reform the NSL in line with required international standards.

The UN has been calling on South Korea to reform the NSL since 1992.

For decades the NSL has been used arbitrarily against those perceived to be supportive of North Korea and this continues to be the case.

Yet, the report highlights an emerging trend in which the NSL is being used increasingly to target individuals and groups that cannot be described as taking a pro-North Korea stance.

This development is an attempt to narrow the space for public debate which seriously undermines  freedom of expression and freedom of association in the country.

The NSL has recently been used to restrict political and academic debate and to curb criticism of official investigations.

Ill-defined clauses in the NSL have left it open for such abuse by the police and security services. The most controversial clause is Article 7 that provides for imprisonment for up to seven years for anyone who ‘praises, incites or propagates the activities of an anti-government organization…’

Whilst the courts have rejected many of the requests from prosecutors for detention warrants under the NSL, there has still been a disturbing increase in its application.

One case highlighted in the report is that of 24 year old Park Jung-geun, who was targeted by the authorities with the intention of stifling online debate. On 21 November 2012, he was sentenced by Suwon District Court to ten months in prison and 2 years’ suspended sentence.  Park is expected to appeal against this sentence.

Park told Amnesty International: "I re-tweeted tweets from a North Korean Twitter account. My intention was to lampoon North Korea's leaders for a joke.”

The warrant authorizing the search of his home in October 2011 stated that: “Park Jung-geun used the Social Network Service Twitter as a very effective method of propaganda.” While the 21 November judgment acknowledged that some of Park’s twitter postings were parody, the judge ruled that his overall acts constituted “supporting and joining forces with an antistate entity.”

The police interrogated Park about his political beliefs on five occasions and asked if he was aware that Twitter is a powerful propaganda tool for the North. Each session lasted five hours.

According to Park, "Even though I disagree with North Korean communism, I'm interested in North Korean culture…I have a right to know about it, to express my freedom."

Park feels that as a target of a gruelling NSL investigation “my brain belongs to the state”.

The whole process has left him physically and mentally exhausted, he has difficulty sleeping, is very nervous and is seeking treatment for stress.

In February 2012, bookseller Kim Myeong-soo was sentenced to 6 months in prison and 2 years suspended imprisonment for violating the NSL by owning and selling the ‘wrong’ books.

In an investigation and trial lasting 5 years, the Special Investigation Bureau (Boan Susadae) of the Gyeonggi provincial police force objected to books on North Korea, Marxism, Socialism or with “revolution” in the title.

All the books were stocked in the National Assembly library or sold in large bookstores. However, the court determined that by owning and selling them Kim was intent on “endangering the existence and security of the State”.

Individuals detained under suspicion of breaching the NSL have also been ill-treated by the authorities as have their families according to testimony given to Amnesty International.

The organization is calling on the government to implement prompt, transparent and independent investigations into these allegations.