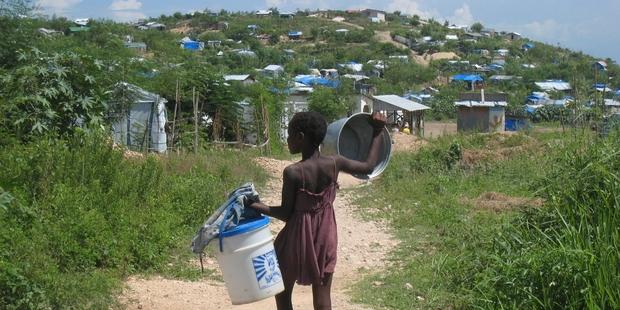 Three years on from the Haiti earthquake the housing situation in the country is nothing short of catastrophic with hundreds of thousands of people still living in fragile shelters, Amnesty International said as it urged the authorities and the international community to make housing a priority.

It is estimated that more than 350,000 people currently live in 496 camps across the country.

According to testimonies gathered by Amnesty International in Haiti, living conditions in the makeshift camps are worsening - with severe lack of access to water, sanitation and waste disposal - all of which have contributed to the spread of infectious diseases such as cholera.
Women and girls are vulnerable to sexual assault and rape.

“As if being exposed to insecurity, diseases and hurricanes were not enough, many people living in makeshifts camps are also living under the constant fear of being forcibly evicted,” said Javier Zuniga, Special Advisor at Amnesty International.

Since the earthquake, tens of thousands of people have been forced from the camps. The International Organization for Migrations reported that nearly 80,000 more people living primarily in camps set up on private land are currently at risk of eviction - 21 per cent of the total camp population.

Marie (not her real name) and her child were violently and forcibly evicted along with tens of other families from Place Jeremie on 21 December 2011.

“The camp committee was putting pressure on us to leave the camp. They said they needed the square for a [football] championship. But we didn’t have anywhere to go so we stayed there. They distributed leaflets every now and then with threats. At night they would throw stones and bottles on our tents … Then one day at 3 o’clock in the morning, they came and started knocking on the doors. Then they destroyed my shelter with razor blades and knives... They pushed me out and started tearing down everything. I did not have time to take any of my things with me; I left only with the clothes I was wearing.”

“Haiti suffered from a severe housing deficit even before the earthquake but for hundreds of thousands, the situation today is catastrophic,” said Javier Zuniga.

Last April, the Haitian authorities made public a draft of a National Policy on Housing. The plan sets out a number of priorities for the construction of houses but does not set the conditions for those living in poverty to access adequate and affordable housing. The plan does also not commit to preventing forced evictions.

With the support of international donors, national authorities also launched, in August 2011, a plan to relocate people from 50 displacement camps to 16 neighbourhoods (“Project 16/6”). Through the project, families receive a rent subsidy of US$500 over a period of 12 months to encourage them to leave the camps for better housing and US$25 for transport. Families are responsible for finding their own home to rent and reaching an agreement with the landlord.

Even though the project helped some families, subsidies are too low, individuals are not supported to find accommodation and families are not offered support in the long-term.

Mｇany people told Amnesty International delegates in Haiti of their worries about not knowing where they would live after the end of the subsidies, as they would not be able to afford the rent. As it is, they are currently struggling to feed themselves and their children, let alone pay for other basic essentials such as clothing, medicine and education.

“Current government housing initiatives seem to focus more on preventing people from living in public squares than providing them with safe homes. What we want to see is the implementation of policies that will actually make the right to adequate housing a reality in the country,” said Zuniga.

The withdrawal of humanitarian actors in early 2011 and funding shortfalls have contributed to worsening living conditions in the makeshift camps. Only a fraction of funds pledged by donors has been allocated to fund housing projects.

“Back in 2010, the world couldn’t move fast enough to help Haiti but three years on, we see that the hopes for its recovery have not been realized, as the rights of Haitians do not seem to have been made a priority. The country needs action from national authorities and real support from the international community,” said Zuniga.

Forced evictions
60,978 individuals have been evicted from 152 camps since the earthquake
78,175 individuals are currently under threat of eviction - 21 % of the total number of IDPs currently living in camps.

Living conditions in camps
72,038 internally-displaced people in 264 of the 541 camps did not have on-site access to water and toilets (in June 2012)
50% of camps remaining did not have on site access to water and toilets, affecting more than one internally displaced person out of six, for a total of 66,546 persons. (June 2012)

Sources: International Organization for Migration, Office for the Coordination of Humanitarian Assistance and the United Nations Development Programme and Post-Disaster Needs Assessment for Hait