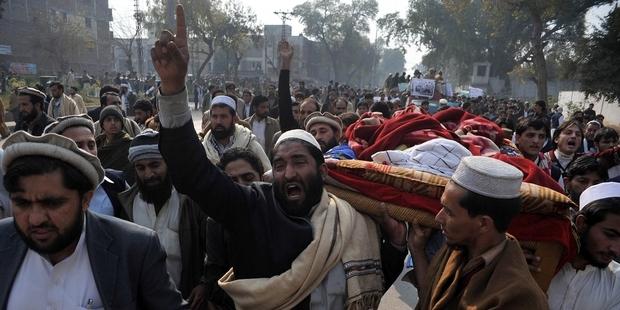 Protest in Peshawar against alleged killings by Pakistan’s armed forces across the Tribal Areas.© A Majeed/AFP/Getty Images

Protests against alleged killings by Pakistan’s armed forces have taken place across the Tribal Areas, as Amnesty Internatinal called on the authorities to investigate and bring anyone identified as responsible for unlawful killings to justice in fair trials.

Yesterday protesters gathered outside the residence of the governor of Khyber Pakhtunkhwa province and the Peshawar Press Club after 18 bodies were found dumped across Barra district of Khyber Tribal Agency the previous day, 15 January.

Relatives claim the 18 people were shot dead by soldiers of the Frontier Corp, part of the Pakistan armed forces, either during or after raids on their homes. The victims include seven members of the same family.

“Our research indicates that bodies of people who have been arrested by the armed forces are being returned to their families or apparently found dumped across the Tribal Areas almost every week,” said Isabelle Arradon, Amnesty International’s Deputy Asia-Pacific Director. “Unless these deaths are properly investigated and the perpetrators brought to justice - without recourse to the death penalty - the cycle of violence will continue.”

In its report on Armed Forces and Taliban abuses in the Tribal Areas, The Hands of Cruelty, released in December 2012, Amnesty International documented extrajudicial executions, enforced disappearances, arbitrary detentions and torture in military custody.

The government has agreed to a list of demands made by tribal elders from Barra, including an end to indiscriminate mortar shelling by the armed forces, compensation for those killed during military operations, and a judicial inquiry into the Barra killings.

“The government’s swift response and agreement to provide compensation and undertake an independent inquiry into the Barra killings are a step in the right direction,” Arradon said.

“But given the poor record in bringing perpetrators of such killings to justice in fair trials, whether they belong to the state or not, much more is needed.”

As far as Amnesty International is aware, no serving or retired member of the Armed Forces has been prosecuted for their alleged involvement in extra-judicial executions or other human rights violations in the tribal areas, despite the existence of sufficient evidence to ground prosecution in many cases, including several documented in Amnesty International reports.

“That record is unlikely to improve while the Tribal Areas are excluded from Pakistani laws for the protection of human rights, and while security laws provide the military with sweeping powers and immunities from prosecution,” Arradon said.

Khyber and North Waziristan Tribal Agencies are part of the Tribal Areas, a region that is excluded from the courts, parliament and fundamental rights protections under the Pakistan Constitution.

Parts of the Tribal Areas are still governed by the draconian colonial-era Frontier Crimes Regulation (FCR). In 2011, the armed forces were granted sweeping powers of arrest and detention under the Actions (in Aid of Civil Power) Regulations (AACPR) which the military invokes to prevent investigations into past and current violations.

“There is no question that Pakistan is facing a major challenge confronting armed groups like the Taliban that are responsible for thousands of deaths and injuries across the country over the last decade,” Arradon said.

“But the failure of the government to respect human rights and the existing legal regime are cementing a culture of impunity, rather than moving the region towards greater rule of law and justice for human rights abuses, whether perpetrated by the Taliban or by the government.”

As discussed in detail in The Hands of Cruelty, the FCR must be repealed or reformed in line with international human rights standards, while the AACPR must be repealed to prevent the armed forces using it as cover for past and current human rights violations. The Pakistani authorities must also formally extend the jurisdiction of the courts and parliament to the Tribal Areas.

“Despite the many challenges, the government can immediately take these important, necessary steps to begin the long journey of bringing respect for human rights to the tribal areas, Isabelle Arradon said.