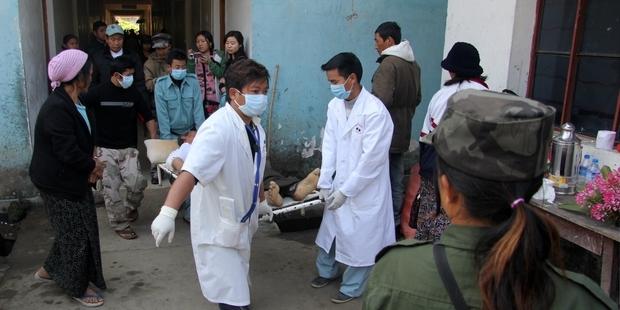 An air strike by the Myanmar armed forces reportedly killed and injured civilians in the town of Laiza, Kachin state.© Tony Neil/AFP/Getty Images

Myanmar must take all possible steps to avoid civilian casualties in Kachin state, Amnesty International said after three people were killed in air strikes which were reportedly carried out by the armed forces in the region.

The Kachin Independence Army (KIA) equally must ensure that they do not position potential military targets near civilian areas, and that they fully respect international humanitarian law.

On 14 January, three civilians including one young teenager were killed in an air strike which was reportedly carried out by the Myanmar armed forces in the Kachin town of Laiza. Four others, two children and two women, were injured in the same attack.

Laiza, a town on the border with China, is used as the de facto headquarters of the KIA.

“Both the army and the KIA must ensure that civilians caught in the conflict area are protected. The three tragic deaths in Laiza shows that there are real concerns that civilian lives might be at risk if indiscriminate fire is used,” said Isabelle Arradon, Amnesty International’s Deputy Asia-Pacific Director.

“We urge the Myanmar authorities to immediately launch an investigation into the attack on 14 January and to determine if international laws of war were violated.”

The current conflict between the Myanmar army and the KIA started in June 2011 after a 17-year ceasefire broke down, and the fighting started to intensify in November 2012.

The KIA, the military wing of the Kachin Independence Organisation (KIO) are calling for increased Kachin autonomy and is the only significant armed group in Myanmar which the authorities have failed to reach a ceasefire agreement with.

In December 2012, the army launched a new operation in Kachin state. Military helicopters and aeroplanes have been flying low over camps for internally displaced persons (IDPs) and towns in the KIA-controlled area since early January, which is causing extreme fear amongst civilians, including people in camps and children.

Ethnic Kachin civilians have reported that the Myanmar armed forces carried out air strikes near two towns in eastern and northern KIA controlled areas in mid-December and air strikes near the town of Laiza on 24 December 2012.

The conflict has left more than 75,000 displaced and requiring shelter in IDP camps. The Myanmar authorities were throughout 2012 reportedly restricting humanitarian access to the IDP camps in the KIA controlled areas leaving people with insufficient food and inadequate sanitation.

“It is absolutely vital that there are no restrictions on aid groups and others trying to reach people in need of assistance as a result of the ongoing conflict. There is a real risk of a humanitarian crisis in the region,” said Arradon.