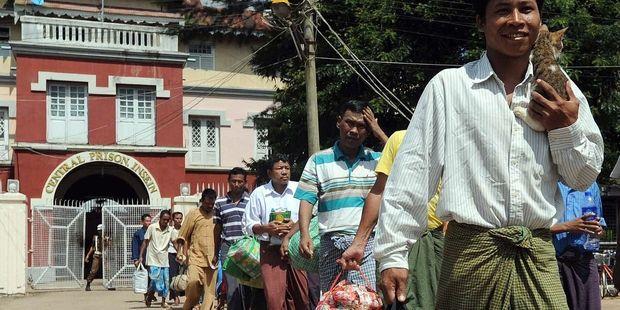 The Myanmar government’s decision to form a committee to review political prisoner cases is a step in the right direction but the review needs to have a much wider reach, Amnesty International said.

“We are heartened by this very important first step towards establishing a review mechanism. However, it is imperative to have assurances that the mandate of this new committee will extend to all prisoners who have been unfairly detained, not only political prisoners,” said Isabelle Arradon, Amnesty International’s Deputy-Director for the Asia-Pacific.

The government yesterday announced it would proceed with setting up the committee, which will look into granting amnesties to political prisoners. Many prisoners of conscience are still imprisoned in Myanmar, having been falsely charged or convicted of a serious offense, arbitrarily detained, or imprisoned solely for their peaceful political activities.

“The commission should have a strong mandate in order to bring an end to arbitrary detentions and ensure human rights for prisoners and detainees in Myanmar.” Arradon added.

Activists, former political prisoners and some politicians in Myanmar as well as some regional and international NGOs, including Amnesty International, have been publicly pushing the Myanmar authorities since late 2011 to set up a body that would take on the country’s vast record of unjust imprisonment.

Amnesty International is calling for the review mechanism to identify all detainees and prisoners who were charged or convicted as a result of unfair trials and other proceedings that did not meet international human rights standards. This would include convictions that relied on confessions extracted under torture.

According to an announcement made by the President’s Office yesterday, the review committee will be comprised of members of the government ministries, civil society organizations and political parties.

“We are waiting for clear commitments that the commission will be independent, impartial, properly resourced, and their decisions based on international human rights standards,” said Arradon.

Amnesty International is calling for the government to immediately and unconditionally release all prisoners of conscience, and to retry fairly any person found to have suffered an unfair trial.