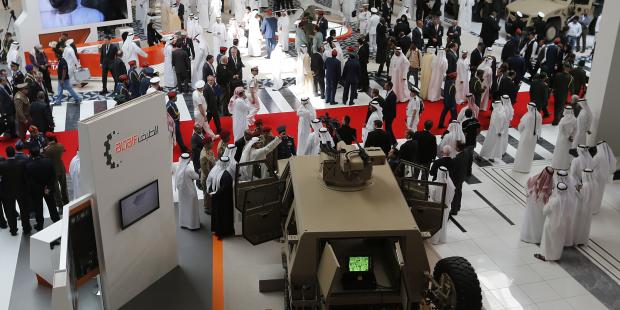 A wide array of conventional weapons and munitions are on display at a massive arms conference in Abu Dhabi this week. © KARIM SAHIB/AFP/Getty Images

China, the USA, EU states and other arms-exporting countries must ensure that any deals brokered at an international arms fair in Abu Dhabi this week do not result in weapons reaching countries where they could contribute to serious human rights abuses, Amnesty International said.

The International Defence Exhibition and Conference (IDEX), held every two years in the United Arab Emirates capital, bills itself as one of the biggest arms bazaars in the world.

This week’s IDEX concludes on 21 February, less than a month before states convene at the United Nations in New York to finalize a historic Arms Trade Treaty where the USA, China and some other states are hoping to get weaker treaty controls.

Amnesty International has repeatedly flagged how the poorly regulated global arms trade contributes to war crimes and other serious human rights violations around the world and since the 1990s has highlighted the problem of unregulated arms brokering.

“The wide array of conventional weapons being displayed at IDEX this week stands in sharp contrast to the narrow scope of items proposed by the USA, China and other states for the draft Arms Trade Treaty,” said Brian Wood, Amnesty International’s Head of Arms Control and Human Rights.

“And if their proposed human rights rules and brokering controls in the treaty remain weak, companies will continue to garner hundreds of millions of dollars worth of weapons deals for unscrupulous buyers.”

International arms fairs and exhibitions like IDEX are one of the main ways for governments and defence industry associations to promote and broker international sales of weapons, munitions, and other military and security equipment and services.

Among the more than 1,100 companies from almost 60 countries exhibiting this week at IDEX, Amnesty International has been able to identify a number of manufacturers from key arms-exporting countries whose products have previously been used in areas where serious human rights abuses have taken place.

For example, state-owned arms manufacturers from China exhibiting at IDEX this week have heavy weaponry, such as artillery systems, on display. Pakistani companies are advertising a range of munitions including small arms ammunition, mortars, artillery shells, and bombs.

Both countries have supplied a wide range of arms to Sri Lanka, which emerged from a bitter, three-decade armed conflict in 2009. During the final years of the conflict, from 2000 to 2009, Amnesty International identified China as one of the biggest arms suppliers to the Sri Lankan armed forces. Both Sri Lanka’s government and the armed separatist group, Liberation Tigers of Tamil Eelam (LTTE), committed serious human rights violations and abuses, and tens of thousands of civilians were killed, with many more injured and abused.

The Chinese companies exhibiting at IDEX also manufacture a wide array of small arms and ammunition, including cartridges that have been used by an armed group in eastern Democratic Republic of the Congo (DRC). UN peacekeeping forces in Goma in eastern DRC have collected cartridge casings with Chinese markings. These were manufactured in 2007 and subsequently used by an armed group in DRC. Amnesty International identified the markings as belonging to a specific Chinese manufacturer.

Amnesty International also concluded that Chinese cartridges were among those found at Bushani, DRC, where government soldiers committed rape, torture and other sexual violence.

Also on display at IDEX this week are a wide range of “less lethal” weapons --- including chemical irritants like tear gas and crowd-control equipment such as baton rounds and water cannon.

Police and security forces have deployed such weapons across the Middle East and North Africa to repress the massive popular uprisings that have taken place in the region since early 2011. While such weapons can have a legitimate use in law enforcement, they can be lethal and Amnesty International has repeatedly decried when security forces have used them to violate human rights, including through the excessive and unnecessary use of force to disperse such protests.

Among the manufacturers exhibiting such “less-lethal” weapons are two companies from the USA and France whose tear gas has been used in Bahrain. Another US firm has supplied such weapons to Egypt. In both Bahrain and Egypt, protesters have died or been severely injured during 2011 and 2012 as a result of the security forces allegedly misusing tear gas.

“Governments are letting the unrelenting commercial pressures of arms companies and their own narrow national interests take precedence over building the rule of law and respect for human rights,” said Wood.

“These are prime examples of why the world desperately needs a strong Arms Trade Treaty that would halt an arms sale when it can be foreseen that there is a substantial risk the arms will be used for serious human rights abuses.”

One exhibitor from South Korea is also promoting cluster munitions at IDEX --- an inherently inhumane weapon. So far 111 states have signed, ratified or acceded to a separate international treaty banning these weapons.

Cluster bombs have been used in recent conflicts. Russian and Spanish-made cluster munitions were photographed in 2011 in Libya. Amnesty International found that al-Gaddafi forces used the weapons in residential areas in Libya and also that Syrian government forces used cluster bombs in Syria in 2012.

“It is unconscionable that internationally banned weapons like cluster bombs that blow the legs off children long after conflicts end are still being peddled at a major international trade fair,” said Wood.

Amnesty International calls on companies that manufacture or supply such indiscriminate weapons to immediately cease production and take them off the market and appeals to all states to join the international Convention on Cluster Munitions which bans their use, production transfer and stockpiling.