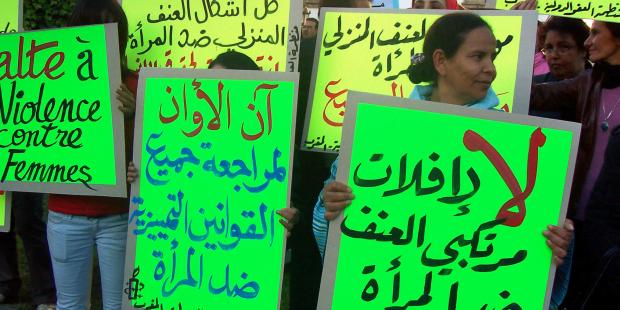 In March 2012, Moroccan 16-year-old Amina Filali swallowed rat poison and killed herself, after being forced to marry the man she said had raped her.

Amina’s tragic story was not uncommon in Morocco, where Article 475 of the Penal Code has allowed rapists to escape prosecution if they marry the victim.

But Amina’s tragic end struck a chord in Moroccan society and the ensuing public outcry prompted the authorities to propose a change to the outrageous article in January 2013.

Human rights organizations including Amnesty International applauded the move but warned that many other articles of the Penal Code needed to be modified if women and girls were to be protected from violence and discrimination.

“Decency” offences
Among the provisions of the Moroccan Penal Code challenged by human rights organizations is Article 486.

Under the section dealing with “decency” offences it defines rape as the act by which “a man has sexual relations with a woman against her will”, and is punishable by five to 10 years’ imprisonment.

If rape is committed against a girl under the age of 18, someone with a disability or a pregnant woman the punishment increases from 10 to 20 years’ imprisonment.

Punishments also vary depending on the victim’s marital status or whether or not she is a virgin -- Article 488 provides for harsher sentences if rape and “indecent assault” (attentat a la pudeur) result in a woman losing her virginity.

In the case of rape, the punishment is 10 to 20 years in prison, as opposed to five to 10 years if the woman has not lost her virginity as a result.

Activists believe the definition of rape must be changed so it is gender-neutral and that other coercive circumstances, which do not necessarily require physical violence, be taken into account.

Marital rape must also be recognized as a specific offence.

“The fact that rape is dealt with under the ‘decency’ offences section places the emphasis on morality and marital status rather than on the attack against the victim’s integrity,” said Hassiba Hadj Sahraoui, Middle East and North Africa Deputy Director at Amnesty International.

“We are worried that the proposed amendment to Article 475 still maintains the distinction between women who are virgins and women who are not, which is discriminatory and degrading.”

Women’s autonomy
Other articles of the Penal Code must also be amended to help protect women victims of abuse.

Article 496, for example, says hiding a married woman “evading the authority to which she is legally subjected” is due a punishment of between one and five years’ imprisonment and a fine.

“Such provisions mean that shelters for women who are escaping from domestic violence may face criminal sanctions. They place the emphasis on women potentially being taken away from someone else’s authority,” said Hadj Sahraoui.

Article 490 criminalizes consensual sexual relations between unmarried people, and provides for a punishment of between one month and one year’s imprisonment.

“Criminalizing sexual relations between consenting adults -- regardless of their marital status -- violates the right to privacy and to free expression. This provision also deters victims of rape from filing a complaint, because they could find themselves prosecuted for sexual relations outside of marriage,” said Hadj Sahraoui.

Integral protection for women
In July 2011, Morocco adopted a new Constitution that guarantees equality between men and women.

However, Amnesty International experts believe even those legal provisions are not enough to ensure women and girls are protected from violence and discrimination.

“Legislative reforms to bring Moroccan law in line with international human rights standards are crucial in ensuring that women’s rights are protected, but changing the law is not enough. In a society where women do not enjoy an equal status with men, it is not only the law but also deeply ingrained societal attitudes which lead to discrimination,” said Hadj Sahraoui

“Key measures to be adopted should include training of police and the judiciary on how to deal sensitively with complaints of violence against women and girls, and protect victims themselves, not their so-called honour or morals.”