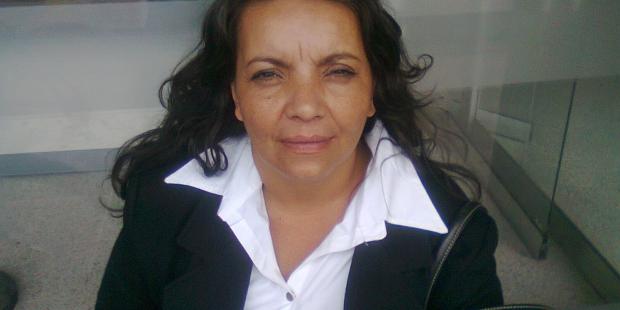 Being a woman human rights activist in Colombia is like being a kamikaze in Iraq.
For years Angelica Bello, a human rights defender from Colombia, rarely spent a day alone--- that would have been, simply, too dangerous.

A number of threats against her because of her job helping the many survivors of sexual violence---women caught up in Colombia’s long-running armed conflict---meant that it was too dangerous for the 45-year-old mother of four to travel alone.
In 2000, two of her daughters were kidnapped and kept as sexual slaves by paramilitaries, and were only released after Angelica personally intervened.
In November 2009, she herself became the victim of sexual abuse, allegedly committed by paramilitaries in retaliation for her human rights work.
The attack followed a string of threats she had been receiving. These threats and attacks forced her to move within the country several times.
By early 2010, the wave of threats and attacks against Angelica was so worrying that she requested protection measures from the Inter-American Commission of Human Rights, a regional human rights institution.
Because Angelica died last Saturday 16 February at 10:50pm at her home in the city of Codazzi, department of Cesar in North Colombia.
According to some local media reports, she shot herself with one of her bodyguard’s guns.
Authorities say they are investigating the incident, after several human rights organizations questioned whether Angelica would have committed suicide.
In early January, she had participated as a spokesperson of survivors of conflict-related sexual violence in a meeting with President Santos to push for women’s voices to be heard in the debate about implementation of the ‘Victims and Land Restitution Law’.
Among other things, she asked the President to implement urgently measures to provide psychosocial support to victims, including survivors of sexual violence.

“They warned me not to report it”
Angelica was not a stranger to the idea of danger and threats were not new to her.
She was well known in Colombia. In 2006, she founded the National Foundation for the Defence of Women’s Human Rights (Fundacion Nacional Defensora de los Derechos Humanos de la Mujer, FUNDHEFEM). She worked to protect some of the thousands of women survivors of sexual violence in the context of Colombia’s long and bloody armed conflict.
“Being a woman human rights activist in Colombia is like being a kamikaze in Iraq,” she told an Amnesty International team in late 2011.
Recalling the sexual abuse she suffered in 2009 as retaliation for her work defending other women, she said:
“I was very scared. When the men abused me, beat me, the first thing they warned me was not to report it. They said that I should look at them very well, in the face, because I could see them again at any moment.”
In 2010, a group of men followed and attacked one of her daughters, who had gone to the capital Bogota to register at a university.
Angelica had the courage to report the threats and sexual abuse to the authorities but little was done to investigate the case and bring those responsible to justice.
Amnesty International and other human rights organizations have denounced how, in the long-running internal armed conflict in Colombia, the warring parties have targeted women human rights defenders and social activists with threats, rape and killings in a bid to silence them.
“Courageous women human rights defenders across Colombia are working to protect the rights of thousands of women who have been treated like little more than trophies of war. These defenders are abused, threatened and even killed with no-one protecting them,” said Marcelo Pollack, Colombia researcher at Amnesty International.

Ineffective protection
Like other human rights defenders in similar protection schemes, Angelica said that her social and family life was being badly affected and that she lived in constant fear that someone would infiltrate her security.
Inspite of the protection scheme, the threats and harassment continued. In the last few years she received a number of death threats, including at least two leaflets signed by a paramilitary group.
“People say that after the third leaflet, they start killing people---let’s see what happens,” she said to Amnesty International in late 2011.
“Angelica’s death is yet another dark reminder that unless human rights abuses are investigated and those responsible brought to justice, the authorities in Colombia will continue to send the message that such abuses are permitted,” said Pollack.
Amnesty International urges the Colombian authorities to carry out a prompt and independent investigation into the death of Angelica Bello to establish all the facts about the incident, to ensure that human rights defenders in Colombia are able to carry out their jobs without fear of reprisals.
The Colombian authorities have to take decisive action to guarantee that women human rights defenders who have received threats are provided with effective gender-specific protection---including psychosocial support by trained personnel.