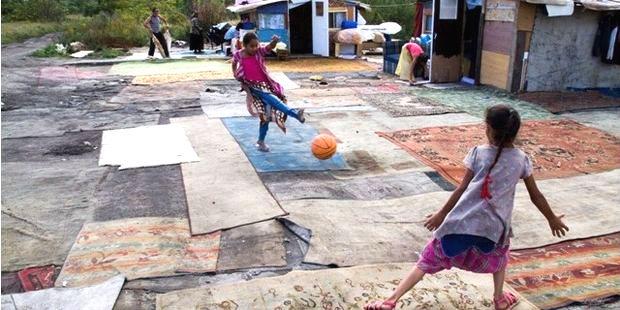 35 children could be made homeless by the evictions © Tomasz Grzyb

A Roma community in Poland are being threatened with imminent eviction and homelessness in a blatant violation of international human rights law.

In a rare move for Poland, the city of Wroclaw in the west of the country is planning to force around 60 Romanian Roma from an informal settlement on municipal land, while offering no alternative homes for them.

"Alternative accommodation must be offered before 60 people, 35 of whom are children, are made homeless," said Marczyñski.

The residents were served with a 14-day eviction notice on 26 March but the municipal government has never consulted them on alternative places to live.

If the authorities fail to provide adequate alternative accommodation or consult the community affected, the eviction would violate international human rights law and standards.

Amnesty International wrote to the Wroclaw municipal government asking them to halt the eviction, but has received no response, and fears that the eviction could take place within weeks.

The community of Kamienskiego Street has been living on the site for three years, since they were evicted from another location in Wroclaw. They do not access public health services or the education system.  The only support the community has received has been from a local NGO, which has provided youth activities and some schooling for the children.

The removal order came just ahead of International Roma Day on 8 April, as Amnesty International is calling on the European Union to put a stop to continent-wide discrimination against Roma which has consigned millions to poverty, dire living conditions, and waves of forced evictions.

"It is upsetting to see an EU member adopt such bullying tactics," said Marek Marczyñski.

The community living in Kamienskiego Street is one of Poland's very few informal Roma settlements in a country where the vast majority of Roma are Polish nationals.