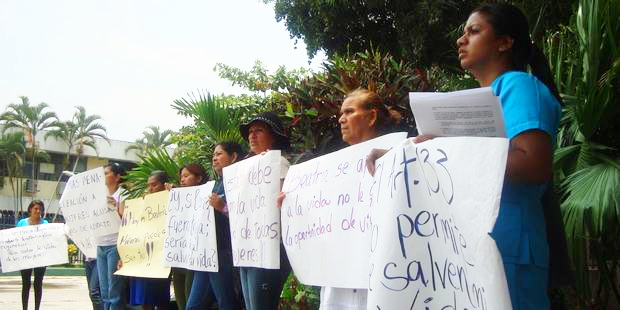 Abortion is illegal in all circumstances in El Salvador. © Amnesty International

The authorities in El Salvador should immediately provide a seriously-ill pregnant woman with life-saving medical treatment that has so far been denied to her.

Doctor say Beatriz could die if she continues with the pregnancy, but have not yet treated her because they fear that if they end the pregnancy they might be prosecuted under the country’s total ban on abortion.

The 22-year-old woman is four-and-a-half months pregnant and has been diagnosed with a number of severe illnesses, including lupus and kidney disease.

Doctors have also confirmed that the foetus she is carrying is missing a large part of its brain and skull, which means it is expected to die before it is born, or within a few hours or days after birth.

It is now more than a month since the hospital requested permission to provide Beatriz with the treatment she needs, but the authorities have still not agreed to it being carried out.

The country's Penal Code states that anyone seeking or carrying out an abortion could be given a long prison sentence. This means both doctors and Beatriz would be at risk of imprisonment if a termination is carried out.

"Beatriz’s situation is desperate and must not wait any longer. Her very chances of survival depend on a decision from the authorities," said Esther Major, Amnesty International’s researcher on Central America.

"The delay is nothing short of cruel and inhuman. The government has a duty to ensure Beatriz can access the health-saving treatment she needs."

She has taken her plight to the country's Supreme Court, which is currently considering her request for medical treatment.

"We hope that the Supreme Court treats this case with the urgency it merits, given that Beatriz's life and health are at risk. She is suffering cruel, inhuman and degrading treatment in being denied the medical intervention she so urgently needs."