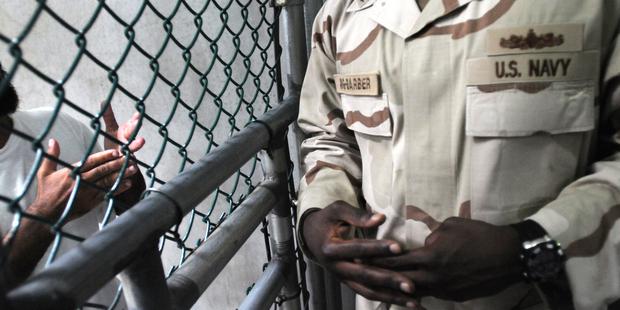 More than half the detainees at Guantánamo are now on hunger strike. (C)US DoD

The US authorities must urgently end indefinite detention at Guantánamo Bay, Amnesty International said today after it was confirmed that more than half the detainees are now on hunger strike.

As of 21 April, 84 of the 166 detainees held at the US naval base in Guantánamo Bay, Cuba, were recognized by the military authorities as being on hunger strike.

Detainees began their protest in early February, in reaction to what they said were abusive cell searches and deteriorating conditions.

The military authorities have rejected the claims, but have acknowledged a sense of despair among detainees because they think the US administration has abandoned its efforts to close the detention facility.

"The current situation in Guantánamo serves as another reminder of the abject failure of the USA to resolve these detentions," said Rob Freer, USA researcher at Amnesty International.

"It would not be surprising if the detainees think the US administration has given up on them. Nor is it surprising that they and their families are suffering considerable distress because of the ongoing failure to close Guantánamo."

According to reports, the military authorities said 16 detainees on hunger strike are being "tube fed" and five have been hospitalized.

While Amnesty International is not in a position to know the details of these cases, the issue of force feeding protesters on hunger strike raises issues of medical ethics, informed consent, detainee autonomy, confidentiality and the treatment of detainees.

The lawyer of Yemeni national, Samir Naji al Hasan Moqbel, who has been on hunger strike since February, told a New York Times reporter that his client had said: "I will never forget the first time they passed the feeding tube up my nose. I can’t describe how painful it is to be force-fed in this way."

"Artificial, compulsory feeding would amount to cruel, inhuman or degrading treatment in violation of international law if it is intentionally and knowingly conducted in a manner that causes unnecessary pain or suffering," said James Welsh, Amnesty International researcher on health and detention.

"The current situation heightens the need for detainees to be guaranteed continued and regular access to independent medical assessment and care, and for all medical personnel to abide by medical ethics."

On 22 March, Amnesty International wrote to US Secretary of Defense, Charles Hagel, expressing concern about the health and well-being of the detainees, and calling for the US administration to work with Congress, as a matter of urgency, to re-prioritize resolution of the detentions and closure of the facility.

The organization has not yet received a response.

"It is long past time for all three branches of the US government to address the situation in Guantánamo as a matter of urgency and as a matter of human rights," said Freer.

"Indefinite detention must end. The detainees whom the government has no intention of charging with recognizably criminal offences should be released without further delay."