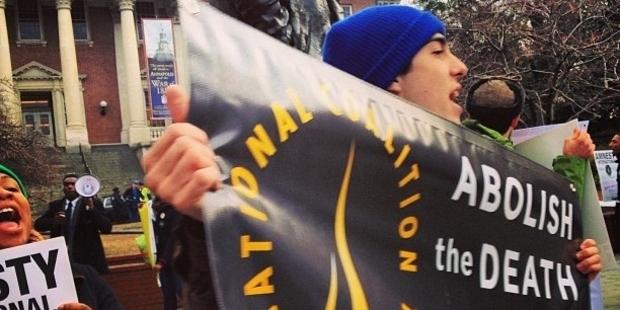 Maryland is the 18th US state to abolish the death penalty, and the fourth in the past five years.(C) Aimee Castanell

The US state of Maryland has joined the overwhelming global trend towards ending the death penalty, Amnesty International said today after Governor Martin O'Malley signed the abolition of capital punishment into law.

The abolition bill, passed by the state legislature in March 2013, makes Maryland the 18th US state to relinquish use of the death penalty since the US Supreme Court approved new capital laws in 1976.

"Maryland has abandoned a punishment that should have no place in a society that claims to respect human dignity, and that in the USA is riddled with discrimination and error," said Brian Evans, Amnesty International USA’s Abolish the Death Penalty campaign director.

"More than a third of US states have now abolished the death penalty, and we urge the remaining 32 states, and the federal government, to follow suit."

Amnesty International urges Governor O'Malley to commute the death sentences of the five men who remain on death row in Maryland despite today’s abolition bill. This would avoid the cruel prospect of the state applying a punishment that it has rightly rejected.

Maryland's abolition of the death penalty is consistent with a global trend towards ending capital punishment. According to the organization’s most recent yearly report on death penalty statistics, despite some disappointing setbacks in 2012, worldwide movement away from the death penalty continued last year.

Such a trend can also be seen in the USA where four states have legislated to abolish the death penalty in the past five years--New Mexico (2009), Illinois (2011), Connecticut (2012) and now Maryland.

On the other hand, seven US states--Texas, Oklahoma, Virginia, Missouri, Ohio, Alabama and Florida--account for nearly three-quarters of the more than 1,000 executions nationwide since 1994. Texas alone accounts for 37% of all US executions since 1976 (when the US Supreme Court gave its approval to new capital laws) and today is approaching its 500th execution.

In January 2013, when Governor O'Malley introduced a bill in the Maryland state legislature to abolish the state's use of the death penalty, he said it "does not work in terms of preventing violent crime and the taking of human life". Pointing to the global picture, he noted that abolitionist countries were "a much more expansive community than the number who still use the death penalty".

His position is in line with that what Amnesty International has been saying since it started to campaign against death penalty 36 years ago: there is no convincing evidence to indicate that the death penalty works as a special deterrent against crime.

The organization opposes the death penalty in all cases without exception, regardless of the nature or circumstances of the crime; guilt, innocence or other characteristics of the individual; or the method used by the state to carry out the execution. The death penalty violates the right to life and is the ultimate cruel, inhuman and degrading punishment.

More than two thirds of the world's countries--140-- have abolished the death penalty in law or practice. In 2012, at least 682 executions were known to have been carried out in 21 countries worldwide. At least 1,722 newly imposed death sentences in 58 countries could be confirmed, compared to 1,923 in 63 countries the year before.

To get more information about global statistics on death penalty you can access Amnesty International's Death Sentences and Executions 2012 report.