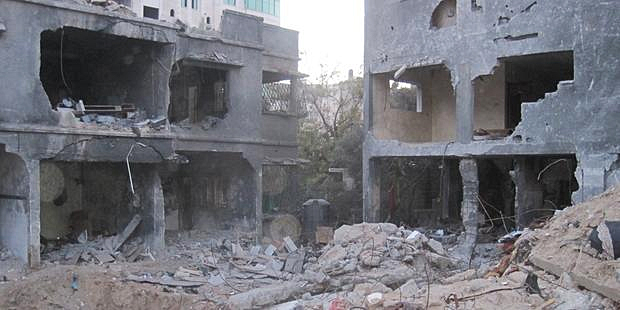 Ten members of the al-Dalu family died when their Gaza City home was hit by an Israeli air strike.

“Once again, the Israeli military is claiming to investigate itself and there is no way for the victims of the Israeli attacks and their relatives in Gaza or for human rights organizations to know that the IDF's internal review is not simply giving soldiers time to coordinate their accounts of events, making justice even more unlikely.” -Ann Harrison, Amnesty International's Middle East and North Africa Deputy Programme Director

The decision by Israel's military not to launch criminal investigations into some 65 cases of  "alleged misconduct" by the Israel Defense Forces (IDF) during Operation "Pillar of Defense", last year's eight-day armed conflict in the Gaza Strip, is another step which strengthens impunity, said Amnesty International, as some of the cases closed could amount to serious violations of international humanitarian law and potentially war crimes.

In its update of 11 April, Israel's Military Advocate General Corps said it had decided to close inquiries into about 65 of the incidents it had examined from the conflict, which lasted from 14 to 21 November. At least 15 further incidents are still being examined. The update did not give details on most of the cases closed, making it impossible to fully assess the implications of these decisions.

During the conflict, unlawful attacks were committed by both Israeli forces, which struck more than 1,500 targets throughout the Gaza Strip, and Palestinian armed groups, which fired more than 1,500 indiscriminate rockets towards Israel. At least 100 Palestinian civilians, including more than 30 children, and four Israeli civilians were killed.

At least three of the cases closed by the Israeli military have been researched by Amnesty International. Two of the cases were Israeli attacks on family homes which killed and injured civilians. In the third case, the Jordanian field hospital in Gaza City was hit by an Israeli missile.

"These inquiries do not meet Israel's obligation to conduct independent and impartial investigations into allegations of war crimes," said Ann Harrison, Amnesty International's Deputy Director for the Middle East and North Africa.

"Nothing indicates that Israel's current investigations into the most recent conflict – all of them once again undertaken by the military – have addressed those fundamental flaws."

Three of the closed cases named by the Military Advocate General have been thoroughly researched by Amnesty International.

Bombing of the al-Dalu family home

At around 2:30pm on 18 November 2012, 10 members of the al-Dalu family, including four children under the age of eight, a 17-year-old girl and four women, were killed when their home in the densely populated al-Nasser neighbourhood of Gaza City, was flattened by a large bomb, dropped without warning by an Israeli fighter jet.

The attack seriously damaged several neighbouring homes. Next door, 19-year-old 'Abdallah Mohammed al-Muzannar and his 79-year-old grandmother, Amina Matar al-Muzannar, were crushed to death when the walls collapsed due to the blast, and other family members were injured.

The Military Advocate General's update says that the attack was aimed at an unnamed "senior terrorist operative". Previously, the Israeli military claimed that the target was Mohammed Jamal al-Dalu, who served in Hamas’ civilian police and was allegedly a member of the al-Qassam brigades. Israeli spokespersons have also named other targets.

Mohammed al-Dalu was killed in the attack, along with his wife Samah and their four young children: Sara (aged 7), Jamal (5), Yousef (4) and nine-month-old Ibrahim.

Even if Mohammed Jamal al-Dalu was a member of the al-Qassam brigades, Amnesty International believes that the attack was disproportionate and thus unlawful.

The update says that the choice of munitions in the attack was taken to "reduce the possibility of collateral damage". But dropping a large aerial bomb in a densely populated residential area without warning cannot be seen as a good faith attempt to minimize harm to civilians.

The update does not demonstrate that the IDF took all feasible precautions to minimize civilian casualties. Unless the IDF can do so, Amnesty International believes that the attack on the al-Dalu family home should be investigated as a possible war crime.

Eighteen-year-old Yusra Basil al-Shawwa was killed by one of two Israeli missiles that hit her family's apartment in densely populated Shuja'iyyeh, east of Gaza City, around 4:30pm on 20 November 2012. Her mother Mona 'Adel al-Shawwa was seriously injured.

Three other civilians in the street (Tareq 'Awni Hijeileh, Saqer Yousef Bulbul and Mahmoud Muhammed al-Zuhri) were killed in the attack, and at least 20 others were injured by shrapnel from the missiles or debris, at least two of them seriously.

The IDF update claims that the target of the strike was a "high-ranking terrorist who was present in the building at that time" but does not name him, and states that precision munitions were used.

However, the streets were crowded at the time of the strike because an official delegation from the Arab League was passing through the area and had just travelled down Baghdad Street, where the apartment building is located.

Information about conditions in the area should have been available to the Israeli military through surveillance drones and other means. The IDF has a responsibility to show that the attack was not disproportionate or otherwise indiscriminate, and thus unlawful. The information given in the update is insufficient to allay these concerns.

Missile damage to the Jordanian field hospital in Gaza City

At least three hospitals and four primary health clinics in the Gaza Strip were damaged during the conflict. The Jordanian field hospital in Gaza City, which has operated since January 2009, was struck by an Israeli missile on 19 November 2012 at approximately 10:20pm.

The missile damaged two floors of the hospital, hitting the reception area of its dermatology and maternity clinics. No one was hurt because the clinic had already closed for the night and the last patient had left shortly before, but dozens of doctors, nurses and hospital staff were on the premises at the time and narrowly escaped harm.

The Israeli military's update states that the damage to the Jordanian field hospital was unintentional and resulted from "attacks against terrorist targets or weapons in close proximity", but does not provide any further details.

The Israeli military will have known the location of the hospital. Staff interviewed by Amnesty International in December 2012 said that the hospital's facilities had not been misused by any armed groups during the conflict and that there was no warning before the missile struck the premises.

Hospitals are protected from attack under international humanitarian law. An intentional strike on medical facilities would be a war crime. The onus is still on the Israeli authorities to prove that the damage to the Jordanian field hospital was truly unintended and that all feasible precautions were taken to avoid civilian casualties.

The military investigating itself

Amnesty International is also concerned that the “Special General Staff Commission” responsible for the IDF inquiries relied primarily on operational debriefings conducted by military staff without the expertise or jurisdiction to conduct criminal investigations.

Operational debriefings, also known as "command investigations", are conducted so that Israeli military planners can learn lessons for future operations; the materials collected are confidential and are not turned over to criminal investigators even in the rare cases when a criminal investigation is subsequently opened, months or years later.

"Once again, the Israeli military is claiming to investigate itself and there is no way for the victims of the Israeli attacks and their relatives in Gaza or for human rights organizations to know that the IDF's internal review is not simply giving soldiers time to coordinate their accounts of events, making justice even more unlikely," said Ann Harrison.

"Israel must conduct prompt, impartial, independent and effective investigations into these and other reported violations of international law, including possible war crimes, committed by its forces in Gaza in November 2012.

"The Hamas de facto administration in Gaza must also conduct prompt, impartial, independent investigations into reported violations committed by Palestinian armed groups during the November 2012 conflict, including the firing of indiscriminate rockets, which is a war crime, and the summary killings of seven alleged 'collaborators'.

"Both parties need serious international pressure to conduct credible investigations. We remind all states of their obligation to exercise universal jurisdiction to investigate and prosecute crimes under international law, including those committed during the 2008-2009 and November 2012 Gaza-Israel conflicts.

"Until credible, independent investigations are conducted and accountability for violations in both of these conflicts is achieved, we continue to call on all states to suspend all transfers of weapons, munitions and related equipment, and military assistance to Israel, Hamas and Palestinian armed groups.