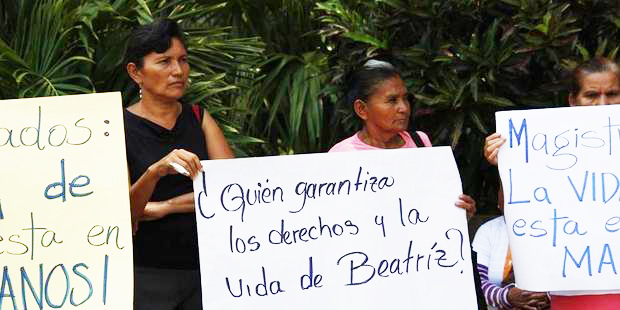 Swift medical action is desperately needed to save a young woman’s life, Amnesty International said after El Salvador’s Minister of Health suggested an early cesarean section could be performed to preserve her health.

Beatriz, a 22-year-old seriously ill pregnant woman who is six months into a non-viable pregnancy and has been diagnosed with a number of severe illnesses including lupus and kidney problems, has so far being prevented from having medical treatment that could save her life.

Doctors have said Beatriz could die if she continues with the pregnancy but haven’t treated her for fear of being prosecuted under the country’s total ban on abortion.

“We welcome the statement by the Salvadoran Minister of Health giving the medical personnel who are treating Beatriz every support to provide the medical intervention she needs to save her life and preserve her health,” said Esther Major, Amnesty International’s researcher on El Salvador.

The Minister of Health’s statement to media came on the same day the Inter-American Court of Human Rights ordered the Salvadoran Government to immediately provide Beatriz the treatment she needs to save her life and preserve her health.

“The verbal commitment made by El Salvador’s Minister of Health to support the doctors treating Beatriz has to be translated into action to prevent Beatriz from dying,” Major said.

“Beatriz is increasingly at risk of suffering long-term health consequences as a result of the already cruel and unnecessary delays. All those with the power to act must now put an end to the game of Russian roulette with this young woman’s life.”

“The government must comply with the order from the Inter-American Court and ensure doctors intervene before Beatriz suffers long-term damage to her health, and provide her with treatment in accordance with her wishes. She must not be made to wait any longer. We will continue to campaign until Beatriz’s life is no longer in danger. The world is watching El Salvador, and urging the government to finally do the right thing.”