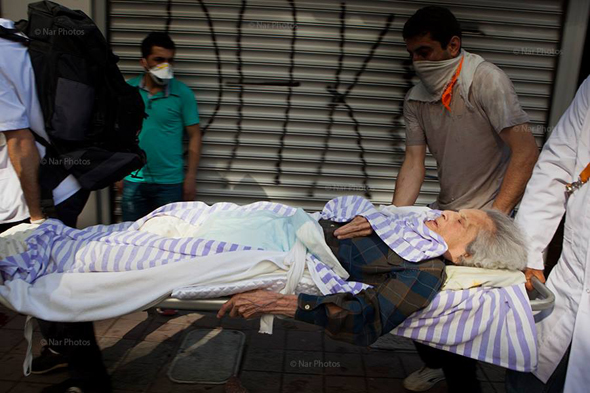 Police in Turkey are refusing to acknowledge that they have people in custody following mass detentions carried out during the night in Istanbul, Amnesty International said today.

More than a hundred are believed to have been detained during Saturday night’s demonstrations in the areas of Taksim, the main focus of the protests, and the nearby districts of Harbiye and Mecidiyekoy.  The actual number is not known but is likely to be significantly higher.

The Istanbul Bar Association told Amnesty International that they knew of around 70 a named individuals who were seen being detained by police but whose whereabouts still cannot be verified.

"Following a night of shocking police violence, the authorities are now denying due process to those they have detained. The police must released them immediately or disclose their location and allow access to family members and lawyers," said Andrew Gardner, Amnesty International's researcher on Turkey, who is currently in Istanbul.

Amnesty International has received consistent and credible reports of demonstrators being beaten by police during arrest and transfer to custody and being denied access to food, water, and toilet facilities for up to 12 hours during the current protests in Istanbul which have taken place for almost three weeks.

The fact that the location of the protesters is not known heightens concerns that they may have been ill-treated by the police.

"Protests have been have been overwhelmingly peaceful and there is no legitimate reason to prevent   all forms of protest in the area," said Gardner.

"I saw tear gas and water cannon being used to clear Gezi Park. There are also reports of plastic bullets being used by the police and the detention of doctors who were staffing the makeshift medical facilities that had been operating there."

"I did not see any violence being used by the protesters against the police while I was observing the protests in Taksim or in nearby Cihangir from 8.30pm until the early hours of the morning. During this time police continually attacked protesters with tear gas and water cannon."

The number of people injured during the violent police intervention that took place throughout the night in different areas of Istanbul is not known but is thought to be in the hundreds. At one point police fired tear gas directly at a makeshift hospital outside the Divan hotel in Harbiye, where many people were being treated by doctors.

Today, as police violence continues sporadically in different areas of the city, police were seen detaining doctors who were treating injured protesters in makeshift hospital facilities at the Ramada hotel in Osmanbay, close to Taksim. The Minister of Health has previously stated that the makeshift medical facilities are illegal and that doctors may face prosecution.

"It is completely unacceptable that doctors should be threatened with prosecution for providing medical attention for people in need. The doctors must be released immediately and any threat to prosecute them removed," said Gardner.

The protests took place following a huge rally in Ankara in which Prime Minister Recep Tayyip Erdogan addressed supporters, attacking the Gezi Park protesters and threatening force to clear them from the park. A similar rally is planned for Sunday afternoon in Istanbul. Protesters are calling supporters to continue to march to Taksim today.