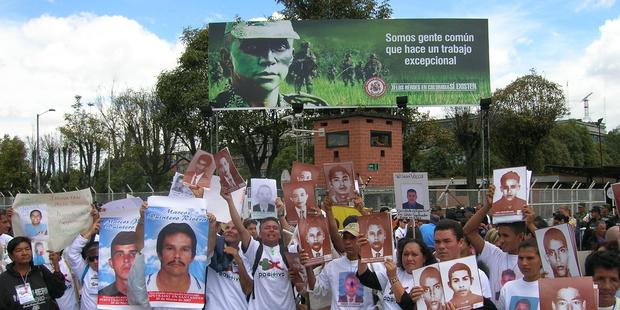 The National Movement of Victims of State Crimes in Sucre, Colombia, have been victims of threats and attacks by paramilitaries.(C) MOVICE

The Colombian authorities must ensure the safety of a human rights defender and his family after an anonymous source warned local police that paramilitaries are intending to kill them, Amnesty International said.

On 3 June, the police commander of the Department of Sucre, in northern Colombia, received an email saying paramilitaries were intending to kill human rights defender Juan David Díaz, his wife and “another person close to the family”.

“This is by no means the first time that a human rights defender from the area has been threatened, while some have even been killed. The Colombian authorities should take all threats seriously and ensure appropriate security is provided to those at risk,” said Marcelo Pollack, Colombia researcher at Amnesty International.

Juan David Díaz is a member of the National Movement of Victims of State Crimes (Movimiento Nacional de Víctimas de Crímenes de Estado, MOVICE), a coalition of civil society organizations campaigning for truth, justice and reparation for the victims of the armed conflict.

MOVICE has also been supporting peasant farmers who want to return to the La Alemania farm, after paramilitaries forcibly displaced them in 2000.

According to the email received by the police, those planning to kill Juan David Díaz were in prison in the northern coastal city of Barranquilla.

A group of paramilitaries, belonging to the bloque Héroes de los Montes de María, have been held there since being convicted for killing his father, the former mayor of the Sucre town of El Roble, in 2003.

Juan David Díaz had filed several complaints against these paramilitaries, alleging that they had organized crimes from inside prison.

His father Eudaldo Díaz was killed after he denounced links between paramilitaries, local politicians and the armed forces at a meeting with then-President Álvaro Uribe in February 2003.

“The authorities must carry out an urgent investigation into the latest threats and all measures must be taken to ensure human rights activists across Colombia are able to carry out their work without fear of reprisals,” said Pollack.

La Alemania farm was occupied in 2000 by paramilitaries backed by the Colombian army. Some 70 members of the same paramilitary group which killed Eudaldo Díaz entered the farm and killed three community members.

In May 2010, paramilitaries killed community member and MOVICE Sucre activist Rogelio Martínez, and last May, six men, at least two of them armed, came looking for his wife, Julia Torres Cancio, the legal representative of those living on the farm.

In the course of Colombia’s long-running armed conflict, between 3 and 5 million people have been forcibly displaced as millions of hectares of land have been misappropriated--often through violence against the rightful owners.

Amnesty International has previously documented how large numbers of Colombian land activists have been targeted for their work in favour of displaced peasants trying to return to their lands.