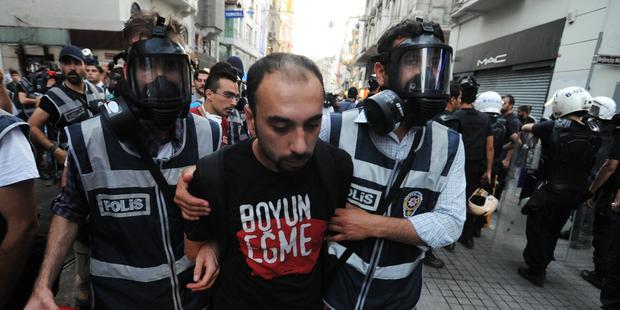 The Turkish authorities must immediately release peaceful demonstrators who were detained in Taksim yesterday. They must also investigate allegations of the excessive use of force after riot police used tear gas and water canons to clear the square and neighbouring Gezi park, Amnesty International said.

"The authorities in Turkey have the duty to ensure people can peacefully gather and express their views," said John Dalhuisen, Europe and Central Asia Director at Amnesty International.

"It is imperative that an impartial investigation into the alleged abuses by riot police is carried out as soon as possible, and that those responsible of any crime face justice."

According to the Istanbul Medical Association at least 30 people were injured yesterday including a 17 year-old man who is in a critical condition with head injuries after he was hit with a gas canister.

On Monday 8 July, the Gezi Park in Taksim was briefly opened to the public following a three week ban on public access.

The park was re-opened at around 3pm by Istanbul Governor Hüseyin Avni Mutlu and was progressively filled with activists and members of the public. Taksim Solidarity had called a public meeting in the park for 7pm, However, at 6pm police told people in the park that they had to leave the area. Shortly after they opened fire with tear gas and plastic bullets.

The police operation moved into the surrounding area, including the busy shopping street Istiklal and continued into the early hours of the morning.

"The behaviour of the police in and around Taksim square last night marks a sorry return to very tactics that provoked the recent wave of protest across Turkey. It seems that the Turkish authorities remain as determined as ever to prevent dissenting voices from gathering in Taksim square." said John Dalhuisen.

Amongst those detained are representatives of Taksim Solidarity, including the General Secretary of the Istanbul Medical Association, Ali Çerkezoðlu, and the Secretary of the Chamber of Architects, Mücella Yapýcý. They are yet to be charged, but are due to appear in court tomorrow, 10 July.