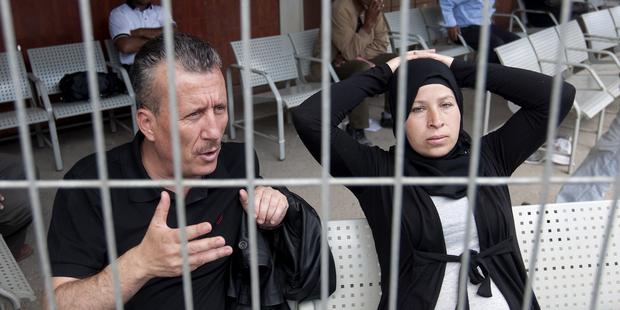 Nariman Tamimi has suffered arrests and raids on her home and her husband, Bassem, has been jailed at least twice.(C) AHMAD GHARABLI/AFP/GettyImages

Amnesty International has accused the Israeli authorities of bullying and judicial harassment of Nariman Tamimi, a Palestinian rights activist who was placed under partial house arrest today to prevent her taking part in peaceful protests while she awaits trial next week.

"This is an unrelenting campaign of harassment, the latest in a litany of human rights violations against Nariman Tamimi, her family, and her fellow villagers.  These arbitrary restrictions should be lifted immediately and the charges should be dropped," said Philip Luther, Amnesty International's Middle East and North Africa Programme Director.

Tamimi was arrested along with another activist Rana Hamadi on Friday 28 June, when villagers of Nabi Saleh walk towards a nearby spring in protest against the loss of their land. In 2009 Israeli settlers occupied the Al-Qaws spring near Nabi Saleh village where Tamimi lives. The illegal settlement now enjoys the protection of the military.

During the protest a soldier approached them waving a piece of paper and saying they could be arrested if they did not leave. When they tried to leave the area, more soldiers approached and arrested them. Both women were charged with being in a "closed military zone".

Following their release on bail on Monday, the court has now put them under partial house arrest. They are not allowed to leave their family homes between 9am to 5pm on Fridays when the weekly protest takes place.

Speaking to Amnesty International following her arrest, Nariman Tamimi described how the two women were kept in conditions that included being held in leg-cuffs, detained overnight in a car, and held in a van carrying male Israeli prisoners who she said shouted verbal abuse at them and intimidated them physically.

Tamimi has already suffered previous arrests and raids on her home. Her husband Bassem has been jailed least twice and held as a prisoner of conscience.

Her brother Rushdi Tamimi was shot in the back with live ammunition by Israeli soldiers during a demonstration last year. He died two days later in hospital. Video evidence shows that Israeli soldiers delayed his family's attempts to take him to hospital.

"This shows the sustained brutality of the military and the Israeli authorities' determination to target and harass those prepared to stand up for their rights. They use every tool in the box to intimidate activists and their families into silence," said Philip Luther.