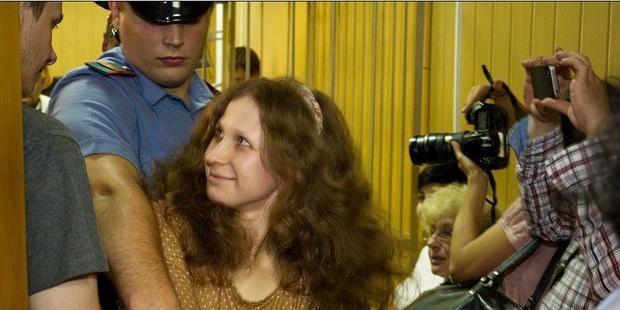 A Russian appeal court decision to refuse parole to Maria Alekhina, one of the Pussy Riot punk group singers jailed for singing a protest song in an Orthodox cathedral is a further travesty of justice, Amnesty International said today.

"This decision is a further confirmation that the Russian authorities are uncompromising in their suppression of freedom of expression," said Denis Krivosheev, Europe and Central Asia Deputy Programme Director.

Today the Perm Regional Court upheld a previous decision to refuse to grant parole to 24-year-old Alekhina. She together with Nadezhda Tolokonnikova and Ekaterina Samutsevich, three of the members of the all-female group Pussy Riot,  were charged with “hooliganism on grounds of religious hatred” after they sang a protest song in Moscow’s main Orthodox cathedral in February 2012. All three were subsequently sentenced to two years imprisonment in a penal colony but later Ekaterina Samutsevich was given a suspended sentence on appeal.

"Maria Alekhina and the other two punk singers shouldn't have been arrested in the first place. They were deprived of their freedom solely for the peaceful expression of their beliefs and Amnesty International considers them to be prisoners of conscience .The Russian authorities must release Maria Alekhina and Nadezhda Tolokonnikova immediately and unconditionally and the sentences against them and Ekaterina Samutsevich should be overturned," said Denis Krivosheev.

“Today’s court decision is meant to intimidate further free speech. It may be presented as principled but it reveals a trend of bullying critics in spite of the country’s obligations to defend and promote human rights.”

In January 2013, Maria Alekhina applied for an early release so she could take care of her six-year-old son. Her application was rejected on the grounds that this had already been taken into account when passing her initial sentence last year.

On the eve of the appeal hearing, more than 100 internationally renowned musicians called for the immediate release of Maria Alekhina and Nadezhda Tolokonnikova.

Angelique Kidjo, one of the signatories, said today: "It's deeply shocking that Masha, a young mother, remains behind bars for a peaceful expression of her beliefs. Together with fellow musicians, artists, Amnesty members and thousands of people from all over the world, we will continue to demand a release from this outrageously unjust imprisonment. Free Pussy Riot!"

In just two days since the letter was issued, over 15,000 people from across the globe have signed a petition calling on the Prosecutor General to ensure immediate and unconditional release of Maria and Nadezhda and the number of the signatories continues to grow.

The parole appeal of fellow imprisoned Pussy Riot member Nadezhda Tolokonnikova will be heard on 26 July by the Supreme Court of the Republic of Mordovia where she is serving her sentence.