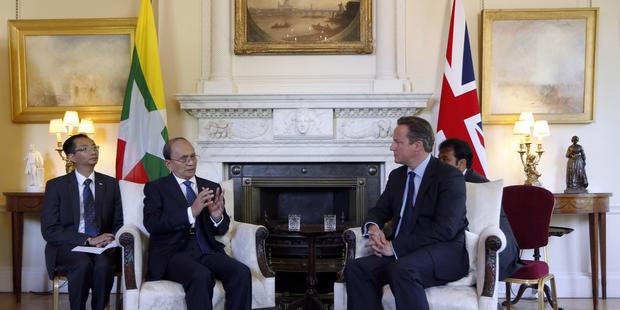 On a recent visit to London Myanmar's leader Thein Sein announced he would release all prisoners of conscience.(C)2013 Getty Images

Amnesty International has called into question President Thein Sein’s recent commitment to clear Myanmar’s jails of prisoners of conscience by the end of the year. On the same day he made this promise to delegates at a conference in London, police in Myanmar’s Rakhine state arbitrarily detained a 74-year-old Rohingya human rights defender.

"The government continues to rely on repressive laws to silence dissent and jail peaceful protesters in Myanmar," said Amy Smith, Amnesty International's Myanmar researcher. "For there to be lasting change in the country, these practices need to be stopped and the laws need to be brought in line with international standards.

During a speech at the independent policy institute Chatham House in London on 15 July 2013, President Thein Sein said, "I guarantee to you that by the end of this year, there will be no prisoners of conscience in Burma."

Thein Sein added that all cases are being reviewed through a committee established by the government earlier this year, "to ensure that no one remains in prison due to his or her political beliefs.

"We'll be looking to President Thein Sein to make good on this promise. He could start by avoiding the creation of new prisoners of conscience by ending the arrest and imprisonment of human rights defenders and peaceful protesters," said Smith.

Since Monday, U Kyaw Hla Aung, a 74-year-old prominent Rohingya lawyer and former staff of a humanitarian non-governmental organisation has been held in police custody in Rakhine state.

U Kyaw Hla Aung has spent more than 16 years in prison in Myanmar due to his involvement in peaceful activities, and continues to be monitored and harassed by the authorities. Most recently, he was arbitrarily arrested and detained in June 2012 along with several Rohingya aid workers following violence between Buddhist and Muslim communities in Rakhine state. He was later released in August 2012. Amnesty International believes he is currently being targeted as an influential Rohingya human rights defender with connections to members of the international community.

Since the statement was issued, further activists have been arrested. For example, on 10 July 2013, police in Pyay Township in Bago Region arrested activist Wai Phyo for organizing a "Free Political Prisoners" poster campaign in July 2011. He is being charged with violating the 1962 Printing and Publications Registrations Act. Wai Phyo is the Secretary of Generation Wave, a pro-democracy youth group in Myanmar.

"It's all well and good for Thein Sein to promise an end to prisoners of conscience, but there is a long way to go from what we've seen in recent months," Smith said.