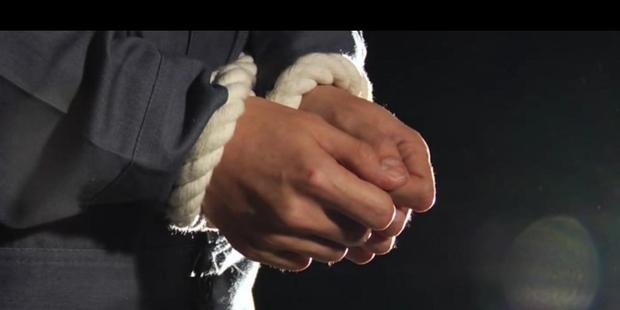 Ahmad Ibrahim, a former Education Minister in al-Gaddafi’s government, was sentenced to death along with five other men (C)Amnesty International

Hundreds of former soldiers and supporters of Colonel Muammar al-Gaddafi are at increased risk of the death penalty, said Amnesty International, following the sentencing of a former minister in al-Gaddafi’s government to death.

Ahmad Ibrahim, a former Education Minister in al-Gaddafi’s government, was sentenced to death by the Misratah Court of Appeals on Wednesday 31 July along with five other men. He was charged with incitement to discord and civil war and undermining state security during the conflict.

Thousands of detainees are being held in relation to the 2011 conflict, including members of al-Gaddafi’s former security forces and others perceived as loyalists. Many are in danger of receiving similar sentences as courts process their cases in the coming months.

“While the victims of war crimes and human rights violations have the right to see justice being done, justice must not turn into revenge. The trials of former al-Gaddafi loyalists are a test for Libya’s judicial system,” said Philip Luther, Director for the Middle East and North Africa at Amnesty International.

“The death penalty is the ultimate denial of human rights, and can never be justified, regardless of the crime or the offender. This ruling is a setback for human rights in Libya and undermines the achievements of Libyan civil society since the end of al-Gaddafi’s rule.”

Ahmad Ibrahim is the first senior official under the previous government to be sentenced to death. The sentences will have to be upheld by the Supreme Court before an execution can take place, but there is a real concern that they may signal a move towards resuming executions.

On 5 June, the Military Court in Misratah sentenced to death two soldiers on charges of opening indiscriminate fire on civilians in April 2011. This followed death sentences for five soldiers last November by the Military Court of Benghazi. Military jurisdictions should never have the power to impose the death penalty.

Among the most prominent loyalists facing trial is al-Gaddafi’s son, Saif al-Islam, who is due to go on trial in Libya later this month. Libya has appealed a ruling by the International Criminal Court (ICC) to hand him over to be tried on two counts of crimes against humanity for his alleged role in the 2011 conflict.

Serious concerns about access to fair trials in Libya remain due to the precarious security situation. Arbitrary detention and enforced disappearances by militias continue. The use of torture and other ill-treatment in detention facilities is widespread.

State institutions, including courts, have been attacked. Lawyers, judges and prosecutors continue to be threatened regularly. In some cases, those representing individuals accused of being al-Gaddafi supporters have been abducted or subjected to physical harm.

“It is doubtful that Libya’s judicial system can be truly independent and impartial under such circumstances,” said Philip Luther.

The last known judicial executions in Libya were carried out in 2010, when at least 18 death sentences were implemented. Under al-Gaddafi, executions were regularly carried out by firing squads. The drafting of a new Penal Code, which among other things aimed at limiting the scope of the death penalty, had begun under al-Gaddafi, but was never completed. Libya’s courts have been slowly resuming imposition of death sentences since 2012.

“The new Libyan authorities must do better than the ones under al-Gaddafi. A moratorium on executions should be adopted immediately, as a first step towards abolition,” said Philip Luther.

Since the end of the conflict, the death penalty has remained in force for a wide range of crimes, including activities that amount to the peaceful exercise of the right to freedom of expression and association.

In a worrying trend, Libyan courts have resumed imposing death sentences in ordinary criminal cases, unrelated to the 2011 conflict, as well. In March five men were sentenced to death by the Criminal Court in Bengahzi for killing four bank staff in Tobruk in May 2012.