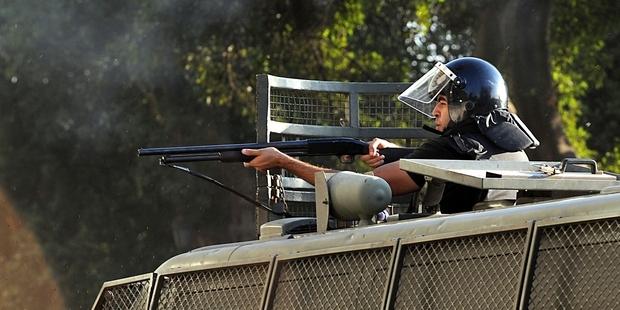 Vast quantities of weapons and equipment supplied irresponsibly to Egypt by a handful of countries are being used for excessive force and unlawful killings. (C)FAYEZ NURELDINE/AFP/Getty Images

All governments must suspend the transfer of weapons of the type used by Egypt’s security forces in violent dispersals and unwarranted lethal force against sit-ins and other protests, Amnesty International said today.

The organization has analyzed some of the transfers to Egypt in recent years--including tens of thousands of conventional weapons worth tens of millions of dollars. Among the countries supplying weapons and ammunition of the type used during the bloodshed on 14 August are the Czech Republic, China, Cyprus, France, Germany, Italy, Serbia, Spain, Switzerland, Turkey, and the USA.

The sales include military firearms, shotguns, riot control launchers and corresponding ammunition and projectiles, as well as armored vehicles and military helicopters.

"Weapons and equipment supplied irresponsibly to Egypt by a handful of countries are being used for excessive force and unlawful killings," said Salil Shetty, Secretary General of Amnesty International.

"Deliveries must be frozen until full, prompt and impartial investigations into the recent violence--and similar incidents over the past several years--have been carried out and their findings made public. How could any state continue to deliver equipment used to disperse demonstrations knowing full well the Egyptian security forces' track record?

"No further weapons should be sent until the Egyptian authorities can demonstrate that the security forces will not use them unlawfully."

Guns, tear gas, armoured vehicles and bulldozers were used by the Egyptian security forces--including riot police and members of the Ministry of Interior’s Special Forces--to clear encampments set up by supporters of Egypt’s ousted President Mohamed Morsi in Cairo. As of Monday, the death toll had risen to about 900 protesters and bystanders, while on Sunday Egypt’s Ministry of Interior told Amnesty International that 69 members of the security forces also lost their lives. On Monday, an additional 25 conscripts serving in the riot police died during an armed attack in restive Northern Sinai.

"Enough is enough. How many people must die as a result of the use of excessive force by the Egyptian security forces before the world wakes up and stops fuelling such violence?" said Shetty.

"The excessive and unwarranted lethal force seen this week is part of a pattern documented by Amnesty International for years. This is why enforcement of the global Arms Trade Treaty, adopted just a few months ago, is so badly needed."

Amnesty International's call comes as EU Foreign Ministers are due to meet in Brussels to discuss their response to the situation in Egypt. The organization calls on all EU member states to fully implement the EU's existing Common Position on arms exports, as well as the human rights provisions of the Arms Trade Treaty--which all EU member states have signed.

The organization is also calling on world leaders to refuse the export of conventional arms when there is an overriding risk the arms would be used to facilitate serious human rights violations--the litmus test contained in the global Arms Trade Treaty adopted by the UN General Assembly on 2 April 2013. All states should sign and ratify the treaty and implement its human rights provisions without delay.