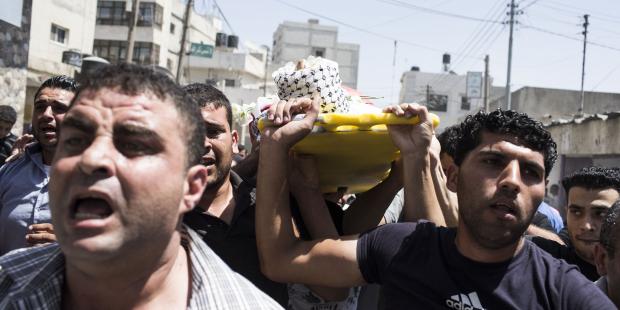 Protests were held in the West Bank amid the funerals of the three Palestinians killed on Monday. (C) Ilia Yefimovich/Getty Images

Evidence strongly suggests that three men who were shot dead with live ammunition during an arrest raid on a Palestinian refugee camp in the occupied West Bank on Monday were unlawfully killed by Israeli forces, Amnesty International said today.

Another 19 people, including six children, were injured by live ammunition fired during the raid on Qalandia refugee camp, the highest number of casualties in a single Israeli operation in the West Bank this year. Five of those wounded, including three children, had injuries to the upper body.

"The loss of life and high number of casualties in this incident raise serious questions as to whether heavily armoured Israeli troops acted according to international standards."

Rubin 'Abd al-Rahman Zayed, a 34-year-old employee of UNRWA, the UN agency for Palestinian refugees, was among those killed when he was shot in the chest by Israeli troops from a military vehicle as it was exiting the camp after the raid.

Local human rights organizations told Amnesty International that the immediate area was quiet at the time and that there was no violence or threats faced by the soldiers when Rubin 'Abd al-Rahman Zayed was shot.

"The circumstances surrounding the death of Rubin 'Abd al-Rahman Zayed raise concerns that this may have been an extrajudicial execution in violation of international law," said Philip Luther.

"Wilful killing of civilians is also a war crime under the Fourth Geneva Convention, which Israel must uphold as the occupying power in the Palestinian territories."

Younes Jamal Jahjouh and Jihad Mansour Aslan were the other two men killed by Israeli forces during the raid. A spokesperson for the Palestine Medical Complex, the main hospital in Ramallah, told Amnesty International that both men were shot in the chest.

The Israel Defense Forces (IDF) have stated that soldiers responded with firearms because they felt their lives were threatened when Palestinians pelted their jeeps with rocks and heavy objects. The IDF has also claimed that Palestinians fired towards the jeeps, and that four bullets were found in the jeeps afterwards.

"Even if Israeli troops felt threatened, they have a responsibility to minimize the risks to those not presenting a threat and should only have used firearms as a last resort," said Philip Luther.

"This deadly arrest raid appears to be yet another example of the use of excessive force by Israeli troops in the Occupied Palestinian Territories. Instead of conducting impartial, independent investigations and ensuring that their troops abide by international law, Israeli spokespeople are already trying to dismiss concerns about these killings and grave injuries."

The IDF has stated that, according to its initial investigation, its troops acted "according to plans... [and their behaviour was] restrained, controlled and proportionate."

Amnesty International has repeatedly raised concerns that Israel's military investigations fail to meet international standards and result in near-total impunity for those responsible for unlawful killings. Any killing or serious injury by Israeli forces should be investigated promptly, independently, and impartially, and, if there is evidence of unlawful killing or arbitrary or abusive use of force, those responsible should be prosecuted by civilian courts in fair trials.

Following Monday's killings, protests erupted in the West Bank, including East Jerusalem, with reports of further injuries and arrests.

Before Monday's arrest raid in Qalandia, Israeli forces had killed 10 Palestinian civilians in the West Bank during 2013, most recently during an arrest raid in Jenin on 20 August. Amnesty International has investigated several of these killings and found strong evidence that they were unlawful.

The UN Office for the Coordination of Humanitarian Affairs documented 2,877 injuries of Palestinian civilians by Israeli forces in the West Bank during the first seven months of 2013.