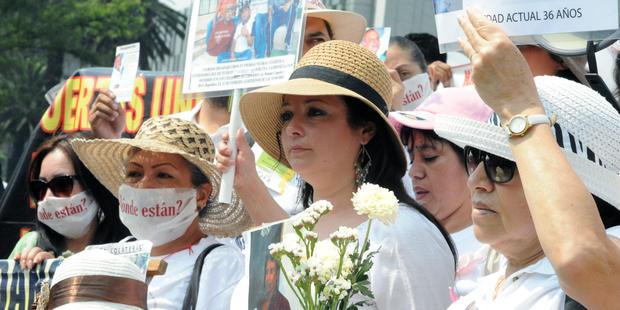 Every year in dozens of countries around the world, thousands of men, women and children are detained by state authorities for no reason, never to be seen again. They are the “disappeared”. In 2012 alone, Amnesty International documented such cases in 31 countries. Here are five facts you should know on International Day of the Victims of Enforced Disappearances, 30 August.

Since the beginning of the uprising that led to armed conflict in Syria two years ago, there’s again been a dramatic increase in the authorities’ use of enforced disappearances to silence opposition and sow fear among their friends and relatives. Thousands of people have been arrested, with many held incommunicado at unknown locations at which torture and other ill-treatment are reported to be rife. This adds to the some 17,000 people, mostly Islamists, who were disappeared in the late 1970s and early 1980s in the country.

In Sri Lanka, some 12,000 complaints of enforced disappearances have been submitted to the UN since the 1980s .But the actual number is much higher, with at least 30,000 cases alleged up to 1994 and many thousands reported after that.

In Mexico, more than 26,000 people were reported missing or disappeared between 2006 and 2012 ? mainly in the context of the violence between drug cartels and security force deployments to combat organized crime. The security forces are responsible for some of these but investigations in almost all cases are so poor that victims are rarely found and virtually no one has been held to account.

More than a third of the countries where Amnesty International documented enforced disappearances in 2012 were in sub-Saharan Africa, in: Angola, Chad, C?te d’Ivoire, Democratic Republic of the Congo, Equatorial Guinea, Eritrea, Gambia, Mali, Mauritania, Nigeria and South Sudan.

Despite constant requests by the relatives of the missing, the UN Interim Administration in Kosovo (UNMIK), responsible for the investigation and prosecution of crimes under international law, failed to investigate hundreds of the enforced disappearances and abductions that took place during the 1989-98 armed conflict in Kosovo, and in its aftermath.

Syrian human rights lawyer Khalil Ma’touq, and his friend and assistant, Mohammad Thatha set off to Khalil Ma’touq’s office on 2 October 2012 but never arrived there. It is believed that they were detained at a Syrian government security checkpoint at some point along the way.

Khalil Ma’touq has provided legal assistance to many victims of human rights abuses in Syria for many years. He has defended hundreds of political prisoners, journalists, and prisoners of conscience.

In February 2013, in response to a request for information from a group of lawyers, a public prosecutor in Damascus denied that Khalil Ma’touq was being held. However, detainees released at that time from the State Security branch in Damascus reported seeing him held there.

People close to the two men have received unofficial tip-offs over time suggesting that Khalil Ma’touq is in extremely bad health - he suffers from advanced lung disease and has severe breathing difficulties. He takes regular medication and must be under constant medical supervision.

Angolan war veterans Silva Alves Kamulingue and Isaías Sebastião Cassule have not been seen or heard from since they were abducted from the street in Luanda, the capital, on 27 and 29 May 2012 respectively. Their families have tried in vain to locate them and the Angolan authorities have repeatedly denied any knowledge of the men’s whereabouts.

Silva was on his way to a protest he had helped organize to demand payments of pensions and salaries owed to them when, at about 3pm, he telephoned a journalist and told him he was being followed by a group of “well-built men”. Soon the journalist could not re-establish contact with Silva, who has not been seen or heard from since.

Four men abducted Isaías in Luanda’s Cazenga district where he was meeting a man who claimed to have a video recording of Silva’s abduction. According to his friend, a car arrived, several well-built men got out of it and walked toward them.

Armando del Bosque was detained by Mexican marines in Tamaulipas state, on 3 August and hasn’t been seen since.

Navy officials deny detaining him but eyewitnesses say they saw 33-year-old Armando driving his car, when marines stopped him, dragged him out of his vehicle, handcuffed him and took him away in a military vehicle.

He was then taken to the Navy’s provisional compound on the outskirts of town. Armando’s father went to the compound a few minutes later and a captain informed him that his son had been arrested and that he was being questioned.

An hour later, the officer told him the captain denied that his son had been arrested and refused to provide any further information.

Petrija Piljević was abducted from in front of her apartment in Prishtinë/Priština on 28 June 1999 by three armed men in Kosovo Liberation Army (KLA) uniform.

In 2000, Petrija Piljević's remains were exhumed and returned to her son. No one has been brought to justice.