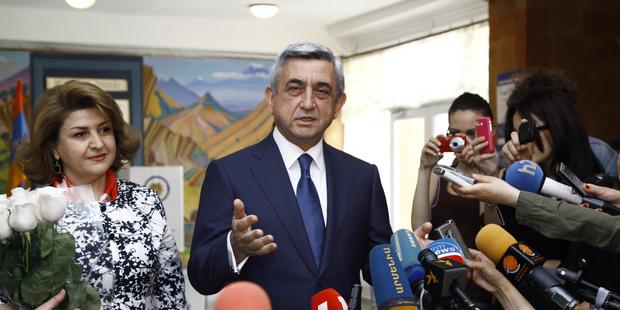 Amnesty urged authorities in Armenia, including President Serge Sarkissian (above) to promote freedom of expression, assembly and association ©Demotix

The Armenian authorities must investigate thoroughly and without delay the brutal attack on two Armenian activists and to ensure that the perpetrators are brought to justice.

“The Armenian authorities have committed to ensure that activists can carry out their work without interference, obstacles, discrimination or fear of retaliation. To honour this commitment means only one thing in this particular case - that the attack on the two activists is investigated impartially and effectively and the perpetrators are found and brought to justice,” said Denis Krivosheev, Europe and Central Asia Deputy Programme director.

Suren Saghatelian and Haykak Arshamian were set upon by half a dozen men, in the courtyard of Haykak’s apartment building at around 10 pm on the night of 5 September. The assault lasted for less than two minutes, but the kicks and punches that were aimed at their heads left both men hospitalised.

The attack left Suren Saghatelian with a broken nose and finger, concussion and several bruises on his head. He had to undergo surgery immediately for his broken nose. Haykak Arshamian was given stitches for a gash on his cheek.

Haykak Arshamian told Amnesty International he was convinced that they had been targeted in connection with their civil society activism. He described the attack as an “assault against civil society and independent media in Armenia”.

Suren Saghatelian is a board member of the Transparency International Anti-Corruption Centre (TIACC) and a departmental manager at World Vision Armenia, a Christian humanitarian organization dedicated to bringing change in the lives of children and communities living in poverty.

Neither Haykak or Suren are affiliated with any political party or organisation, but they had been actively involved in protests against the government’s recent decision to join the Eurasian Union.

Haykak described how from three days ago he had begun to place posts criticising the decision to join the Union. He had also taken part in a protest outside of the Presidential building in Yerevan on Wednesday, 5 September. As most of the participants at the protest were youth activists, Haykak believes that he may have been perceived as a leading figure and organiser, which he denies.

“Civil society activists must be able to carry out their activities without interference, obstacles, discrimination or fear of retaliation. The authorities are obliged to promote the rights to freedom of expression, assembly and association. Only an effective investigation will demonstrate that they take their human rights obligations seriously,” said Denis Krivosheev.