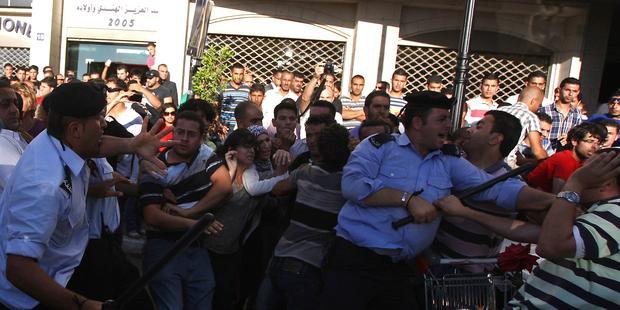 Palestinian Authority (PA) police and security forces in the occupied West Bank must cease using unnecessary and excessive force against demonstrators, and must be held accountable when they commit human rights violations, Amnesty International said today.

A new briefing, published today details how police and security forces have repeatedly carried out unprovoked and unlawful attacks on peaceful protesters. It also accuses the PA authorities of allowing them to do so with impunity.

"Standards during the policing of demonstrations in the West Bank continue to fall woefully short of those prescribed by international law," said Philip Luther, Middle East and North Africa Director of Amnesty International. "As a result, the rights to freedom of expression and assembly are being severely eroded."

During incidents on 30 June and 1 July last year, police and security forces, some in plain clothes, violently attacked peaceful demonstrators who were protesting against a meeting in Ramallah between Palestinian President Mahmoud Abbas and an Israeli government minister. At least five protesters required hospital treatment. The violence caused public outrage and in its aftermath President Abbas announced that he had appointed an Independent Investigative Committee to look into the conduct of the police and security forces. The Interior Minister also set up a separate internal investigation.

More than a year later, the PA has yet to publish the full report of the independent investigation although it has disclosed a summary of the findings, including that PA police and security forces used "unnecessary", "unjustified" and "disproportionate" force against peaceful protesters who posed no risk and journalists, and acted outside the law. The Interior Ministry's internal investigation is said to have reached similar conclusions, although its report has not been published either.

A 23-year-old woman who was hospitalized following the violence told Amnesty International:

"Despite the findings of the Independent Investigative Committee, the PA has not prosecuted any of its police or security forces for the violence they perpetrated against peaceful protesters and other unlawful conduct in Ramallah on 30 June and 1 July last year," said Philip Luther. "Such impunity inevitably fosters further abuses, as evidenced by further incidents in which PA forces have used excessive force against protesters since mid-2012."

Most recently, PA police and security forces are alleged to have violently attacked peaceful protesters on at least four separate occasions in July and August 2013. Some attacks were carried out by officers in plain clothes who targeted and sought to intimidate women protesters and journalists present to report on the demonstrations.

Security forces were also implicated in causing the deaths of two Palestinians in recent months. On 8 May, Khaleda Kawazbeh died in unexplained circumstances during a PA police raid in the village of Se’ir, near Hebron, and eight others were injured. On 27 August, Amjad Odeh, 37, died after he was shot in the head, apparently by PA police, during a protest.

"The Palestinian Authority needs urgently to call an end to this pattern of abuse by its police and security forces and to break the cycle of impunity which fosters it," Philip Luther said. "The PA must ensure that police officers and other members of the security forces who commit unlawful acts against protesters and others are held to account through criminal prosecutions, and ensure that all law enforcement personnel are adequately trained to respect rights when policing protests."

Amnesty International is also calling on the EU, the USA and other donor governments that have provided financial aid to the PA to train its police and security forces to demand that they are held accountable to international human rights law and standards.

"International donors need to make clear to the PA's leadership that they are not prepared to tolerate continued rights violations by PA police and security forces and that future assistance is dependent on PA leaders' ensuring full accountability," said Philip Luther.