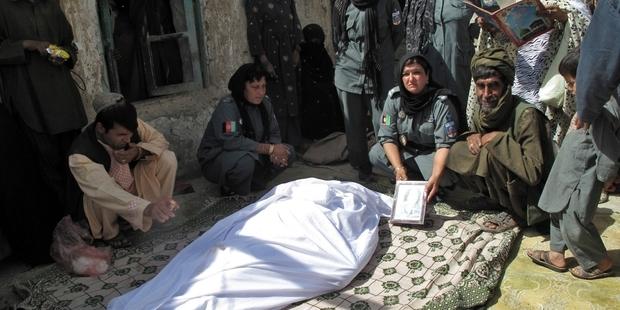 Lieutenant Negar, 38, died on Monday morning in hospital after two unidentified gunmen on a motorbike shot her in the neck on Sunday near police headquarters in Lashkar Gah.(C)AFP/Getty Images

The killing of one of Afghanistan's most senior woman police officers is the latest setback for women's rights in Afghanistan, Amnesty International said.

Lieutenant Negar, 38, died on Monday morning in hospital after two unidentified gunmen on a motorbike shot her in the neck on Sunday near police headquarters in Lashkar Gah, the capital of restive Helmand province. She had been an outspoken advocate for the protection of women who challenge the use of violence against women and girls.

Other women in the public eye--including her predecessor, an Indian writer and two representatives of the Ministry of Women's Affairs--have been killed in Afghanistan in the last year, and a woman MP was recently held hostage by the Taliban.

"Women's rights have come a long way in recent years, and may have reached a tipping point. There are more women in positions of authority, increased access to education, and welcome new laws to protect women and girls from violence. But as Afghan women gain voice and power, they face new and increasing threats. Some defenders of women's rights say they are once again beginning to self-censor, fearing new reprisals," said Polly Truscott, Deputy Asia Pacific Programme Director at Amnesty International.

"At the same time we fear that Afghan and foreign leaders are becoming inured to sheer numbers of attacks on high-profile women, combined with the every day violence against women and girls, but there is so much more that can be done to protect and promote women's rights in Afghanistan."

President Karzai passed the Elimination of Violence against Women (EVAW) law by decree in 2009. However, not only are many of its provisions still not fully implemented, but since then some have attempted to scrap the law altogether.

"The Afghan authorities must do everything in their power, with international assistance, to protect women’s rights," said Truscott.

"This must include the full implementation of the 2009 law to eliminate violence against women, and the training of authorities at all levels to ensure it affects public policy in practice."

According to Afghanistan's Independent Human Rights Commission, in recent years, violence against women "is a widespread and ever increasing phenomenon" across the country.

For well over a year, there have been many reported cases of beatings, kidnappings and killings of women and girls across Afghanistan--particularly in rural areas.

Women and girls are attacked by their partners, relatives, some security personnel, and armed groups, including the Taliban, sometimes in broad daylight.

"Violent crimes against all women, including the shooting of Lieutenant Negar must be swiftly and fully investigated, and whoever is responsible brought to justice in fair trials and without the death penalty," said Truscott.